A witness who claimed to be a former member of the Davao Death Squad (DDS) dropped a bombshell at the Senate on Thursday, accusing then Davao City mayor and now President Rodrigo Duterte of ordering the bombing of a mosque in 1993 and the killing of Muslims.

The witness, Edgar Matobato, was presented by Senator Leila de Lima at the resumption of the hearing of the Senate committee on justice and human rights on the spate of killings in the country.

Matobato said he was a member of the Cafgu (Citizen Armed Force Geographical Unit) until Duterte became Davao city mayor in 1988 and recruited him to join a group dubbed the “Lambada boys.” The group, he said, had only seven members including him.

Motabato said they later became the DDS, the group that has long been believed responsible for extrajudicial killings in Davao City.

In 1993, Matobato said, more members joined the group, including rebel returnees and policemen.

It was also in 1993 when the Davao Cathedral Church was bombed. 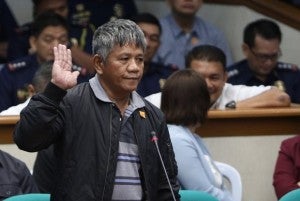 Motabato answered “Yes,” adding that he was in the same room when Duterte ordered the bombing.

He said the former mayor later ordered them to arrest and kill the Muslim suspects.

Among the people they allegedly killed was a certain Salik Makdum, whom he said they abducted from the Island City of Samal in 2002.

Scattered rains over Luzon, Vis-Min due to ‘habagat’, thunderstorms — Pagasa

Underdog Dasmariñas vows to fight to the death vs Inoue