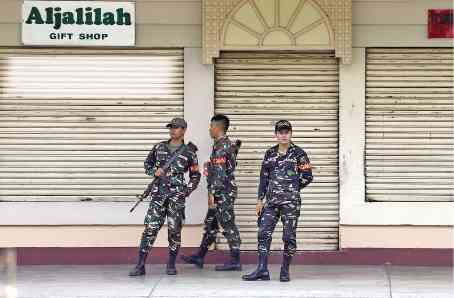 SOLDIERS carrying assault rifles have been posted in strategic areas in Davao City following the Sept. 2 bombing in a night market that killed 15 people and wounded 69 others. JEOFFREY MAITEM/INQUIRER MINDANAO

DAVAO CITY—Police yesterday filed charges of multiple murder against nine suspects in the Sept. 2 terror attack here, including a man who, witnesses said, carried the bomb that killed 15 people and wounded 69 others in a crowded night market.

One of the suspects had been described as an expert in bombmaking who has links with international terror groups that sent members and leaders to some parts of Mindanao to flee from a US-led international manhunt.

The charges were filed past 5 p.m. at the city prosecutor’s office. Present at the filing were Senior Supt. John Dubria, Davao City police chief and other police officers.

Of the nine who were charged, only one has been identified, but police are withholding his name.

Prosecutor Nestor Ledesma said the suspect’s identity will not be made public until after a conference among city prosecutors on the case.

Dubria also declined to give details about the motive for the bombing.

Earlier, Abu Ramie, the Abu Sayyaf spokesperson, claimed the blast was the work of the Daulat Ul Islamiya, an Abu Sayyaf-allied group.

“We are currently investigating his affiliation,” said Dubria of the key suspect.

A few days after Dela Rosa issued the statement, which contradicted that of Abu Ramie’s, authorities raided the lair of suspected bomb makers in M’lang, North Cotabato province.

Jokrie Buisan, a suspected bomb maker, was arrested but the main targets, Anwar and Guiamadel Sandigan, had eluded authorities.

The Sandigans were identified in an earlier report as siblings but authorities later said they were a father and son tandem and were among people that slain Malaysian terror suspect Zulkifli bin Hir, alias Marwan, had taught how to make bombs.

Sources later said Buisan had pointed to Abdulwahab Sabal, vice mayor of Talitay town in Maguindanao province, as among the clients of the bomb makers. Sabal had also been tagged by President Duterte as among government officials involved in drugs.

Seized from the group of Sabal were a bomb, guns and “shabu” (methamphetamine hydrochloride).

The Sabals and their men were flown to Manila and presented for inquest proceedings at the Department of Justice in Manila for possession of explosives, unlicensed guns and drugs.

Dubria said he is incapable of verifying Dela Rosa’s statement linking the bombing to drugs.

“It is a high-level information and as of the moment, I can only speak for the Davao City police,” he said.

On Monday, a relative of Sabal said the family received information that the vice mayor is being linked to the bombing. Allan Nawal, with a report from Nash Maulana, Inquirer Mindanao