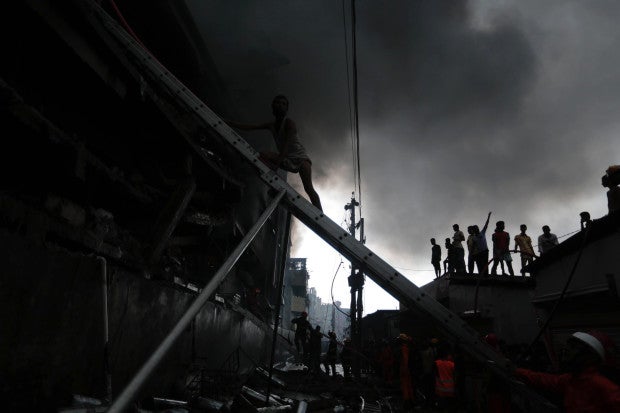 Bangladesh firefighters were struggling Sunday to search a packaging factory following a major blaze that killed 25 people amid fears more bodies could still be inside the destroyed building.

Around 100 people were working at the factory on Saturday when the fire caused by an explosion in the boiler room tore through the four-story structure on the outskirts on the capital Dhaka.

Senior firefighting official Anis Mahmud said his workers toiled through the night to douse the blaze but the structure was still too dangerous to enter properly to search through the debris.

READ: 21 dead in explosion and fire at Bangladesh factory

“The building is still standing on its skeleton but most of the walls have collapsed. There are small pits of fire inside therefore we have not managed to go in,” Mahmud told AFP.

Some 70 people were also injured, some critically, in the blaze at the Tampaco Foils Limited factory, which packages food and cigarette products for local and foreign brands.

Another firefighter said he feared more bodies were still inside the factory in the industrial town of Tongi.

“There might be more bodies underneath the rubble as many people were working inside during the accident,” he told AFP on condition of anonymity.

The blaze is the latest in a series of deadly accidents to hit impoverished Bangladesh, whose $27-billion garment industry is the world’s second largest behind China’s.

The accident is the worst since the collapse of the Rana Plaza garment complex in 2013 that killed more than 1,100 people in one of the world’s worst industrial disasters.

That tragedy triggered international outrage and successfully put pressure on US and European clothing brands to improve deplorable safety conditions at the factories that supply them.

Bangladesh factory inspector general Syed Ahmed said an investigation would occur into the cause of Saturday’s accident.

“We will find out the responsible people behind this disaster and will take all necessary and legal actions,” Ahmed told AFP.

Labour rights groups urged the Bangladesh government and Western companies to work harder to protect the safety of workers in their supply chains.

“The boiler explosion and resulting fire … demonstrates the ongoing dangers to industrial workers in that country,” a statement from a consortium of groups, including the International Labor Rights Forum, said./rga