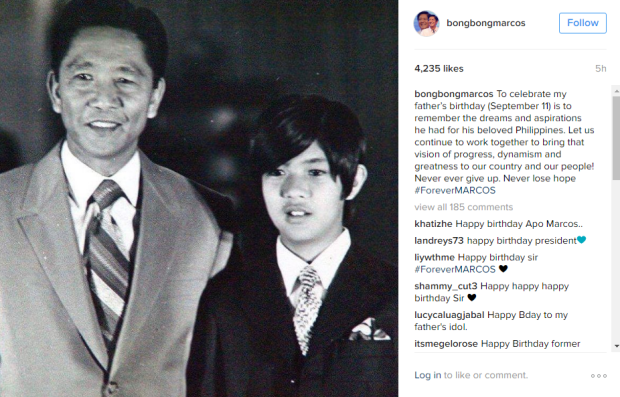 Amid a legal battle before the Supreme Court on the planned hero’s burial for their father, the children of the late dictator Ferdinand E. Marcos on Sunday took to social media to commemorate the birthday of the former President.

Using the hashtag #ForeverMARCOS, former Senator Ferdinand “Bongbong” Marcos Jr. posted on Instagram a black-and-white photo of him as a young boy alongside his father and namesake.

The younger Marcos, who lost to Vice President Leni Robredo in the May elections, called on Filipinos to “work together” to achieve his father’s “vision of progress, dynamism and greatness” for the Philippines.

“To celebrate my father’s birthday (September 11) is to remember the dreams and aspirations he had for his beloved Philippines. Let us continue to work together to bring that vision of progress, dynamism and greatness to our country and our people! Never ever give up. Never lose hope #ForeverMARCOS,” Marcos wrote in the caption.

Marcos’ eldest daughter also shared photos and links of petitions and campaigns for the internment of her father at the Libingan ng mga Bayani in Taguig City, which was directed by President Rodrigo Duterte as part of his campaign promise.

Big protest in San Francisco: No hero’s burial for Marcos