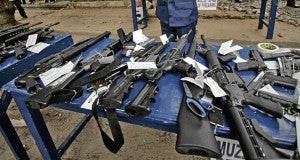 JONES, Isabela — The mayor of this violence-marred town gave up weapons registered to her late brother, Mayor Jesus Sebastian, as part of the local government drive to curb killings.

Mayor Leticia Sebastian surrendered to the police on Sept. 7, three high-powered guns, a Carbine rifle with 11 bullets, an M1 Garand rifle with eight bullets and a .76 handgun, which carried expired licenses.

Sebastian was slain in the late 1990s by suspected communist rebels.

Sebastian’s brother-in-law, Carlos Rustia, and municipal engineer Johnny Lazaro also gave up their weapons, among them an M-16 Armalite rifle and a .45 pistol.

On May 7, three people, including retired SPO4 Arthur Anunciacion, were killed by 15 armed men who attacked and wounded the sister of a mayoralty bet in Namnama village.