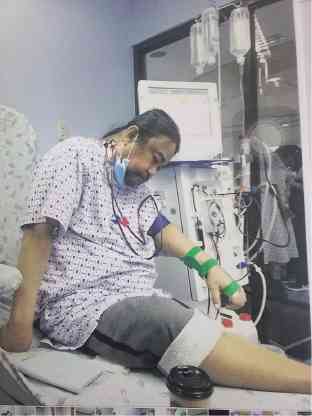 TOO LATE TO REACH DIGONG The widow of Lenido Lumanog prepared this photo of her ailing husband and her letter asking President Duterte to grant him pardon. Last month, she got a chance to be at one of the President’s events in Malacañang—but was not allowed to approach him. The photo and the letter remained with her until Lumanog died at the National Kidney and Transplant Institute on Tuesday. CONTRIBUTED PHOTOS 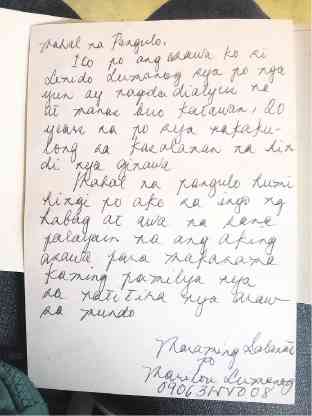 Even in death, Lenido Lumanog, one of the men found guilty of killing a key enforcer of martial law during the Marcos dictatorship, remained at the mercy of the system.

Lumanog’s widow Marilou on Wednesday deplored the way the Bureau of Corrections (BuCor) handled his remains following his death at the National Kidney and Transplant Institute (NKTI).

In an interview, Marilou said she and her children waited more than 15 hours before they were able to move his body from the NKTI morgue to a funeral parlor.

The 60-year-old Lumanog was one of the so-called “Abadilla 5” convicts who were found guilty of murdering retired Col. Rolando Abadilla in 1996, despite serious doubts raised in court about their involvement. He died of kidney failure on Tuesday morning after being hospitalized for more than four years.

He was affirming his innocence up to his last breath and was hoping to be granted pardon by President Duterte, Marilou said in an earlier interview hours after Lumanog died.

Marilou, who patiently waited at Good Shepherd Cathedral in Fairview, Quezon City, on Tuesday afternoon for the body to arrive, said her husband’s death was not immediately reported to BuCor by its own guards assigned to Lumanog at the hospital.

She waited the entire Tuesday for instructions from BuCor which still wanted the body to be brought back to New Bilibid Prison in Muntinlupa City for fingerprinting, which is supposedly part of the protocol for inmates who have died in hospitals.

“They told us that’s where we should claim the body, then take it back to the hospital after for the clearance,” Marilou said, stressing she and her children did not agree to what BuCor wanted to happen.

BuCor officials could not be immediately reached for comment at press time.

To save time and effort, Marilou requested that the fingerprinting be done right at the NKTI. The request was granted, but the procedure that started around 6 p.m. Tuesday took about two hours to finish. “That was the only time we were able to get the body and take it to St. Peter Funeral,” she said.

The mortuary procedures at the funeral home, which were particularly longer for a body that had undergone dialysis, also took almost a day to complete.

Lumanog’s remains finally arrived at the cathedral around 4 p.m. on Wednesday. The family plans to bury him at Himlayang Filipino in Tandang Sora after nine days. Marilou said they would wait for Lenido’s brothers and sisters to arrive from New Zealand and Australia.

The family also said they had yet to settle hospital bills amounting to P688,000. Marilou said she asked for a discount since they had already paid the hospital almost P4 million for the duration of her husband’s treatment.

But she was only allowed to make a promissory note before she was able to get the body out of the hospital. She must pay the balance before a death certificate can be issued to the family.

Marilou plans to again seek assistance from the Philippine Charity Sweepstakes Office, which had been of great help earlier, especially when Lumanog had a kidney transplant in 2004.