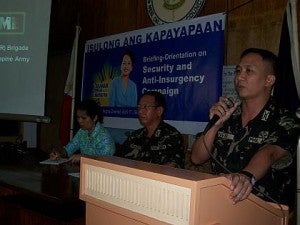 In this file photo several years ago, Colonel Erwin Bernard Neri, then a lieutenant colonel, is seen at right, speaking at the podium during a counter-insurgency seminar in Negros Oriental. (Photo from the archives of the Philippine Information Agency-Dumaguete or PIA Dumaguete at http://archives.pia.gov.ph/?m=1&t=2&fi=080418-r7-orientation.jpg&mo=0804 )

DAVAO CITY – The military-led Task Force Davao got a new commander after Mayor Sara Duterte batted for the relief of Col. Henry Robinson in the aftermath of the last Friday’s deadly blast that killed 14 people and wounded 70 others here.

Originally from Taguig City, Neri is a member of the Philippine Military Class of 1988.

“The relief and designation of officers in leading line units is normally done to carry out mission accomplishment above anything else,” Batchar said.

“The unit commanders shall likewise steer and manage administrative, operational and logistical requirements of his unit. They shall likewise take full responsibility for anything the unit does or fails to do,” he added.  SFM