SAYING he apparently used his military training to commit murder, the Department of Justice (DOJ) has approved the filing of criminal charges against Vhon Martin Tanto, the motorist who admitted killing a biker in a road rage incident in Quiapo, Manila, on July 25.

In a resolution dated Aug. 18, the DOJ found probable cause to indict Tanto for murder and serious physical injury. The second charge is in relation to the case of a teenager who was hit by a stray bullet. 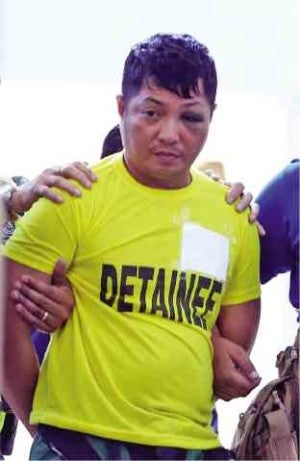 The DOJ resolution cited Tanto’s extrajudicial admission during inquest proceedings and media interviews. It also cited the evidence presented by the Manila police, including the account of eyewitness Bryan Yu and closed-circuit television camera footage of the incident.

Surrendering to the police five days after the incident, Tanto told the media that Garalde was the first to show rudeness and aggression but, after they exchanged blows, the latter offered a handshake. But when Tanto rejected this gesture, Garalde threatened to smash the windows of his car, causing the motorist to just “snap” and reach for the pistol he was keeping in his car.

Citing the element of treachery, the DOJ noted that Garalde, an e-games outlet employee, was shot while he was back on his bike and about to leave the scene.

The resolution also said that being trained in handling firearms, Tanto “took advantage of his superior strength and expertise” in shooting victim Garalde. Tanto, a Quiapo resident, was a reservist Army private whose unit is based in Caloocan City.

Tanto’s lawyer, Trixie Cruz-Angeles, said they would no longer file a counter-affidavit to refute the allegations.

The resolution was written by Assistant State Prosecutors Jeannette Dacpano and Robert Ong Jr., and was approved by Prosecutor General Claro Arellano.