I will eat Abus alive–Duterte 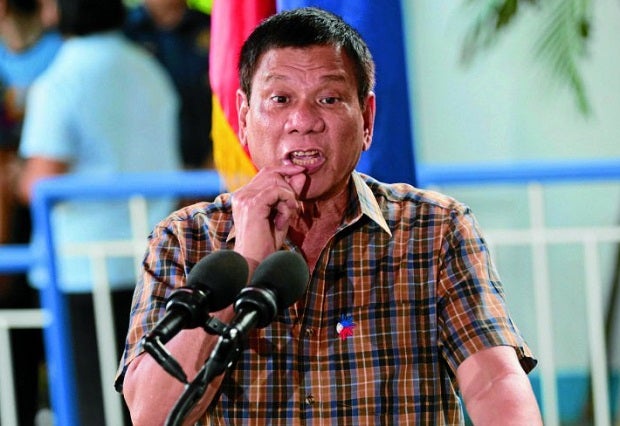 VIENTIANE—I will eat you alive. Just bring me vinegar and salt.

President Duterte issued this warning to the terrorist Abu Sayyaf Group, which he previously regarded as “not criminals,” but a group of Moros “driven to desperation” because of the government’s “failed promises.”

Addressing the gathering of the Filipino community here on Monday night, Mr. Duterte vowed to exact vengeance on the Abu Sayyaf for the killing of 14 people and the wounding of 67 in an explosion that ripped through a popular night market in his hometown of Davao City last week.

“Let me state my case. They will pay …. Well, give me time. There will be a time when I will really crush all of them. You watch me. Anyway, you know how I operate,” the President said in a speech at Feungfar Convention Center.

Mr. Duterte issued the warning as the Philippine military said more than 10 battalions would be pursuing about a thousand fighters and supporters of the Abu Sayyaf in Sulu. Each battalion has about 400 soldiers.

The President, who flew here to attend the 28th and 29th summits of the Association of Southeast Asian Nations, his first foreign travel since he took office on June 30, also promised to end the Moro and communist rebellions before his term ends in 2022.

Defending his tough stance against criminality, he said lawless elements like terrorists were already “beyond redemption.”

“If I have to face them, you know I can eat humans. I will really open up your body. Just give me vinegar and salt, and I will eat you,” the President said, drawing laughter from his audience, including some children.

Speaking to the Abu Sayyaf, he said: “Go ahead. Set off bombs. Time will come when I will eat you in front of the people. I will devour you and if I have to, erase you.”

He also sought the understanding of the Filipinos based here as he defended his ruthless take-no-prisoner strategy against the narcotics trade, which has led to the killings of some 2,000 drug suspects and elicited international condemnation.

“If I relent, if I stop, if I renege on these commitments, I would have compromised the next generation of the Filipino,” he said.

After hurling invectives at US President Barack Obama, Mr. Duterte turned his ire on the Abu Sayyaf, the al-Qaida-linked terror group that has denied involvement in the Davao blast.

He said: “I am very sad. I share the grief (of the families) of those who died. They were the collateral (damage). But that will not stop us because I cannot go to them and say, ‘Please stop and I am on bended knees.’”

“I carry the burden of a country, a sovereign state and at all costs, I must uphold the dignity and the integrity of our country,” Mr. Duterte said.

He confirmed the arrival of three battalions—63rd, 16th and 69th Infantry Battalions from the Visayas, Luzon and Davao, respectively.

Tan said two brigades, with four or five battalions each, were already in Sulu.

“These fresh deployment of three battalions is not part of the five battalions that President Rodrigo Duterte earlier committed,” he said in an interview.

Lt. Gen. Mayoralgo dela Cruz, chief of the Western Mindanao Command, said the Abu Sayyaf armed bandits numbered roughly 250, “but they can reach about a thousand considering their affiliations (with other armed groups) by affinity and by blood.”

Tan said each battalion was assigned to a particular threat group and a particular municipality. “Different battalions in different towns can conduct operation simultaneously,” he said.

The primary targets in the military operation are Radullan Sahiron alias Commander Putol, Alhabshi Misaya, Muammar Askali alias Abu Ramie, and the subgroup leaders of factions of the Abu Sayyaf.

Tan said after the Aug. 29 encounter in Patikul town where 15 soldiers were killed, the bandits had reportedly splintered into smaller groups and blended with civilians in the communities.

Raden Ikbala, the convenor of Bassakao, (Bangsamoro against Kidnapping and other Crimes) appealed to government troops to make sure they were hitting the bandits and not homes, farms and civilians.

Ikbala, in his Facebook post, said the soldiers “must walk toward the Abu Sayyaf, walk to make sure genuine Abu Sayyaf will be killed.”

“So that no human life will be wasted, no fruits will be destroyed (because it’s the fruit season in Sulu now and fruits are the main source of living of our people),” he added.

Tan said the soldiers would try to minimize collateral damage. “But if there will be those affected by this war, I believe there is a greater good after the war. We consider damage, but it should not hinder the operations to achieve better or greater good in the future,” he added. With a report from Julie S. Alipala, Inquirer Mindanao, in Zamboanga City