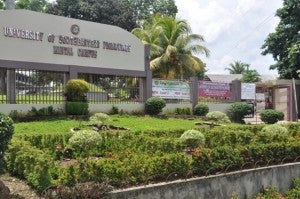 The University of Southeastern Philippines Mintal Campus in Davao City (Photo from the university’s official website at http://ic.usep.edu.ph/)

The bomb threats came four days after a powerful blast ripped through the Roxas Night Market here that left 14 people dead and 67 others wounded.

The Davao City Police Office said that a bomb scare was reported from the Sta. Ana National High School in Barangay 28-C.

“It was immediately checked by responding authorities and the school was declared clear of any explosives,” Senior Insp. Catherine dela Rey, DCPO spokesperson, said.

Another bomb threat was reported at the Obrero Campus of the University of Southeastern Philippines (USEP), one of the biggest universities in Davao City.

It was followed by another threat at the Mintal Campus of USEP on Friday afternoon, Dela Rey said.

However, bomb units of the Davao police and the military were still scouring the USEP Mintal Campus as of Tuesday afternoon.

“We are still not sure about the USEP Mintal Campus unless the authorities will say that it is clear of explosives,” Dela Rey said.

Classes have been disrupted in the schools but authorities are asking the public especially students and parents not to panic.  SFM