Bato: No abusive cops in fight vs 'state of lawless violence' | Inquirer News

Bato: No abusive cops in fight vs ‘state of lawless violence’ 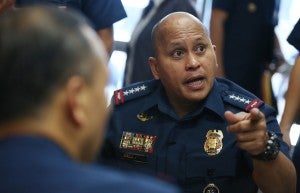 CAMP GEN. ALEJO SANTOS, Bulacan — Philippine National Police Director General Ronald Dela Rosa said on Monday (Sept. 5) no police officer would abuse his or her authority in the security measures designed and applied to counter the “state of lawless violence.”

He said the declaration placed the police on heightened alert, and has required police officers to be visible in areas considered to be high impact targets, such as church, malls, and terminals which draw a huge number of people.

Dela Rosa visited Bulacan to inaugurate a rehabilitation and livelihood training center inside the Bulacan police headquarters. The center is currently serving 24 female drug users from different towns who surrendered to the police.

Dela Rosa said he was surprised to meet a 75-year old woman among the center’s clients.

He said the youngest drug abusers he encountered in the course of the government’s anti-drug campaign were aged between 12 and 14 years old.

Dela Rosa proceeded here after a visit to Camp Olivas in Pampanga.  SFM