Awkward welcome for Obama prompts cheeky US tweet vs China 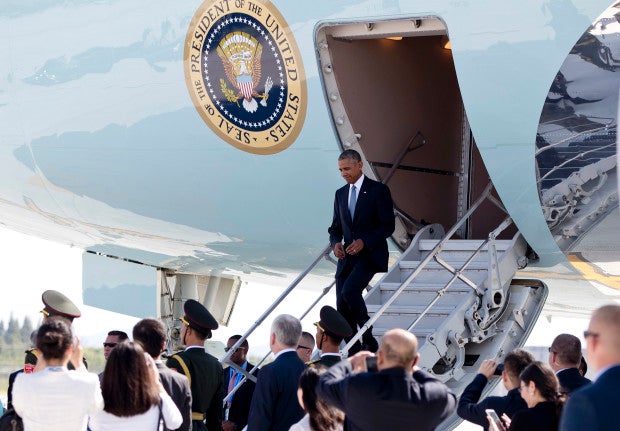 U.S. President Barack Obama steps off Air Force One using an alternative set of stairs after Chinese officials at the Hangzhou Xiaoshan International Airport in Zhejiang province failed to provide stairs, Saturday, Sept. 3, 2016. Moments later, US and Chinese officials engaged in an argument over protocol in handling Obama. A Chinese officials was heard shouting at a US official, ‘This is our country! This is our airport!’ AP

WASHINGTON, United States — A tarmac tiff between US and Chinese officials as President Barack Obama arrived in the city of Hangzhou prompted the posting — and prompt deleting — of an uncharacteristically sarcastic tweet by a US spy agency.

“Classy as always China,” read the Defense Intelligence Agency tweet, which linked to a New York Times article about the incident.

The post was quickly deleted but not before the Wall Street Journal noticed the snark.

The agency later tweeted its apology: “Earlier today, a tweet regarding a news article was mistakenly posted from this account &amp; does not represent the views of the DIA. We apologize.”

The tarmac kerfuffle included a shouting match that broke out as White House staffers tried to help American reporters position themselves to film Obama’s arrival in the eastern Chinese city for a G20 summit.

“This is our country!” a Chinese official in a dark suit shouted at a White House staffer. “This is our airport!”

The outburst was caught on camera, in an awkward prelude to face-to-face talks between Chinese President Xi Jinping and his American guest.

When US National Security Adviser Susan Rice and senior White House staffer Ben Rhodes tried to get closer to the president, the official also turned his ire on Rice, prompting her Secret Service agent to step in.

Obama took the fracas in stride on Sunday, saying that although the United States insists on press access and does not “leave our values and ideals behind,” the traveling White House juggernaut could be intimidating.