Negros execs back Duterte move vs ‘state of lawlessness’ 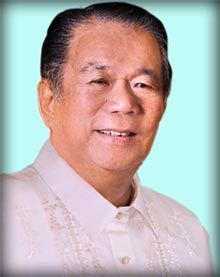 BACOLOD CITY– Negrense local executives condemned on Sunday the bombing in Davao City and expressed full support for President Duterte’s moves to stop “lawless violence” all over the country.

The bombing at the Davao City night market left 14 dead and about 60 people injured.

But concerns over the country’s state of security have not been limited to Mindanao.  In Negros Occidental on the Visayas island, the Philippine National Police in the province has gone on full alert while local officials have stepped up security.

Negros Occidental Gov. Alfredo Maranon Jr. said the  Negrense people were condemning in the strongest possible terms “this dastardly act that goes beyond the boundaries of reason and sense of nationhood.”

“This terroristic activity, which claimed 14 lives and injured 74 others in Davao City must strengthen our resolve to seek a lasting solution to end extremism in the South,” he said.

“We are confident that the President’s declaration of the state of lawlessness is also in the best interest of our nation,” he said.

“I have ordered our police to review and update our security plans in the light of the audacity and ruthlessness with which the Davao attack was carried out,” he said.

“We pledge our full and whole-hearted support to the measures that President Rodrigo Duterte may undertake to restore law and order in the country,” Leonardia added. 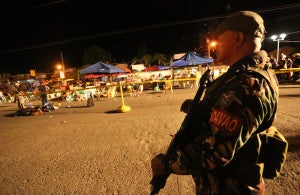 A soldier keeps watch at a blast site at a night market that has left several people dead and wounded others in southern Davao city, late Friday Sept. 2, 2016. The powerful explosion in President Rodrigo Duterte’s hometown in the southern Philippines took place amid a security alert due to a major offensive against Abu Sayyaf militants in the region, officials said. (AP Photo/Manman Dejeto)

Bacolod  Bishop Patricio Buzon called the bombing an evil act that was absolutely unjustifiable. “I wish to express my deepest sympathy and solidarity with the victims and pray for them, most particularly those who lost their lives,” he said.

San Carlos Bishop Gerardo Aminaza condemned the terroristic act and commiserated with the families of the wounded and those killed in the Davao bombing.

“I enjoin all Christ’s faithful in the Diocese of San Carlos to pray for all the affected and all those who have to respond to keep peace and help the victims’ families rebuild their lives. We join all the rest in proclaiming: Violence must not have the last word!” Alminaza said.

Bayan Negros lighted candles in front of the Fountain of Justice in Bacolod to pray for the victims of the Davao bombing.

They have called for justice for the victims of terror and said Negrenses stand with the people of Davao. SFM