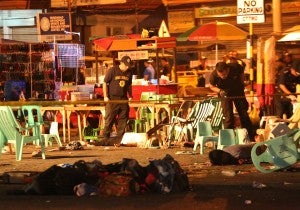 Crime scene investigators process the bombed night market outdoor restaurant in Davao City. Fourteen people were killed and dozens were wounded in the first bombing attack on a civilian area under the Duterte administration. The Abu Sayyaf has been blamed for the attack. (AP FILE PHOTO)

MANILA — A Protestant ecumenical group said on Sunday, it has been praying to God to bestow wisdom upon the Philippine government, amid the “senseless and inhumane” bombing of a Davao City night market that killed 14 on Fridayevening and prompted President Rodrigo R. Duterte to declare a nationwide “state of lawless violence.”

In a statement, the National Council of Churches in the Philippines denounced the blast as “an attack against [an] unarmed, peace-loving civilian community.”

The group said it has been praying to God to “bestow upon our government leaders wisdom to discern the root of this violence and perseverance to pursue necessary actions to solve the situation,” said retired Sandiganbayan Justice Raoul V. Victorino, NCCP chairman and dean of the Philippine Christian University College of Law.

The Iglesia Filipina Independiente, an NCCP member church, echoed the sentiment in its separate statement.

“We pray for our government leaders wisdom to understand the cause of terror and determination to prevent violence from gaining force,” said Most Reverend Ephraim S. Fajutagana.

At the same time, the NCCP said it has also been praying for the empowerment of societal institutions in bringing those involved in the bombing to justice.

“The Council implores the God of Peace and Justice to work with us and through us, and the institutions and machineries in our society, so that the perpetrators of this gruesome action be swiftly put before justice,” Victorino said.

Fajutagana also said that “the perpetrators of this heinous crime must be swiftly brought to justice.”

The NCCP also called on Filipinos to unite and transcend color, political persuasions, and beliefs or creed, in order to pursue justice and peace and promote respect for human life and dignity.

“In so doing, we usher in God’s promise of life in all its fullness,” Victorino said.

Another member church, the United Church of Christ in the Philippines’ Southeast Mindanao Jurisdictional Area, called for vigilance in these critical times.

“We also pray that as peace-loving citizens of our country, we should uphold and embrace the message of peace and justice to be in our midst as we walk in the way of unity as people of God in these troubled times,” said UCCP-SEMJA’s Bishop Hamuel G. Tequis.