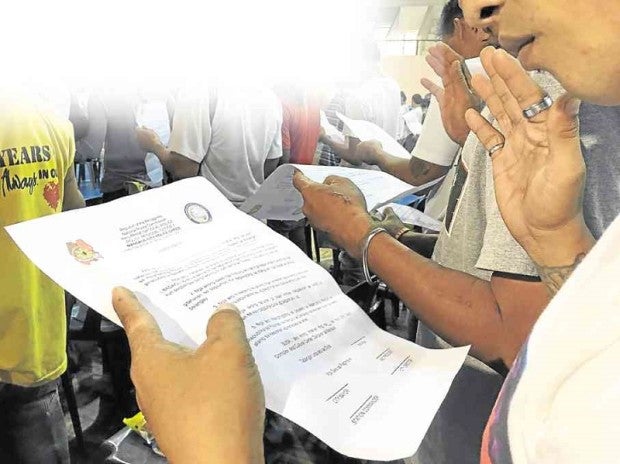 Anita (not her real name) had dreams of becoming a lawyer, but poverty forced her to drop out of high school at 16. Worse, she found herself in a world of drug addiction.

“I had a miserable life since my father asked me to quit school,” Anita said in Cebuano. “I felt so hopeless not to be able to pursue my dreams.”

For years, she had sought a way out of depression. She went out with men who were also addicts and introduced her to try assorted drugs, “shabu” (methamphetamine hydrochloride) and marijuana.

Now 50, she realized her mistakes and moved to a new path for the sake of her seven children. “I’m tired. I want to live a peaceful life for my family. The drugs I’m using absolutely don’t help,” she said.

In July, Anita and 179 others showed up at the police station in the village of Subangdaku in Mandaue City as part of “Oplan Tokhang,” a police campaign to persuade users and pushers to cease their involvement in drugs.

A month later, she went to the pastoral center of San Roque Parish in Subangdaku and joined 90 others who were told about the barangay-based recovery and reintegration program.

Ugnayan ng mga Barangay at Simbahan (Ubas) launched the pilot long-term program for drug dependents last Aug. 28. “In the fight against illegal drugs, there can be no shortcuts,” said Fr. Carmelo Diola, the lead convener.

Diola stressed that the Catholic Church and other sectors of society should not just watch as addicts waste away. “If we don’t reach out to them, their co-drug addicts will,” he said. “The opposite of addiction is connection.”

In Central Visayas, at least 71,000 pushers and users have “surrendered” to the police in Cebu, Siquijor and Bohol provinces since July. They are too many for the 45 rehabilitation centers in the country, six of which are in Cebu.

The centers can accommodate  only up to 5,000, so the Church decided to create the community-based program to rehabilitate users.

Chief Supt. Noli Taliño, police director for Central Visayas, promised to support the Ubas program. He directed all city and provincial police directors and station police chiefs to help the group. “I will create a team to assist the Church in this endeavor,” he said.

Cebu Archbishop Jose Palma said the Church must provide a haven for drug addicts, stressing that they are not outcasts.

“Many lives have been destroyed by illegal drugs. But we should not despair,” Palma said. “There’s hope. I’m happy that people come together to find solutions to this problem.”

Ubas’ program consists of four stages: admission of addicts into the program, psychosocial intervention, capacity building and reintegration into society.

At the start, Diola said, the kind of help addicts need should be determined. Those who need extensive treatment must be brought to the rehabilitation centers, but those who do not will be offered free counseling and spiritual transformation in the community-based facilities.

Volunteers and psychiatrists from Magone Home of the Salesians of Don Bosco are helping out in the program, which started in Subangdaku where village officials, led by Ernie Manatad, and the local police are very cooperative.

But Ubas and the regional police force want to replicate the program elsewhere. “We need to transition from Tokhang to Labang (Lahat Bangon),” Diola said. “There can be no fence sitters in the campaign.”

The priest is no stranger to the evils of drugs. He and the Church-based Dilaab Foundation Inc. had actively campaigned against “narcopolitics” since the early 2000s.

He said the proliferation of drugs, though, was a result of the failure of the justice system, as well as the community’s apathy. “In a larger sense, illegal drugs have become a dominant reality due to the failure of all sectors to come together,” he said.

“Back then, it was a  very lonely fight. Now, the picture has completely changed. Those in illegal drugs are on the defensive,” he added.

‘Mother of all crimes’

Diola said he appreciated President Duterte’s campaign to rid the country of drugs and drug trafficking, which the priest branded as the “mother of all crimes.”

“Our society has just grown so used to the prevalence of drugs that we no longer pay attention to the countless rapes, murders and thievery brought by illegal drugs,” he said.

“Societies are teetering toward perdition as families slowly disintegrate in the face of the drug menace,” he said.

Diola said the failure of previous administrations to address the drug scourge had made it “spin out of control.”

While eradicating illegal drugs is badly needed, sustainable solutions must also be found, he said. He, however, cautioned against shortcuts in solving the problem, alluding to the summary executions of drug suspects.

From July 1 to Aug. 25, 73 suspected drug pushers were killed in police operations in Central Visayas, and 97, by unidentified assailants.

Aside from its community-based rehabilitation program, Diola said the Church also wanted to make people aware of the evils of drugs and to gradually remove the social stigma attached to addiction.

Addiction is primarily a public health issue, Diola said. He urged the government to stop treating drugs as mainly a law enforcement problem.

“This requires building more rehabilitation centers and adequately training and building the capability of its health workers to deal with drug addicts,” Diola said.

The business sector must also be willing to provide training and job opportunities for recovering addicts, he said.

Diola said the Roman Catholic Church and other denominations must do their share in addressing the problem.

“The spiritual dimension is essential. We need to realize that drug abuse is but a manifestation of human hearts remaining restless unless they rest in God,” he said.