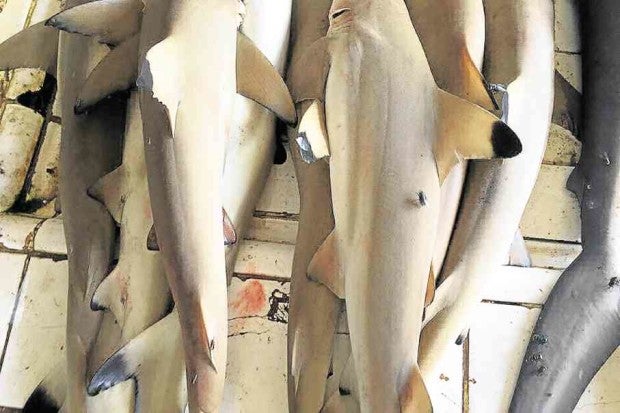 BACOLOD CITY—The Bureau of Fisheries and Aquatic Resources (BFAR) is urging local governments to regulate, if not ban, the catching and sale of juvenile sharks.

Juvenile sharks are on the brink of becoming an endangered species, said Delfin.

Dave Albao, executive director of the Philippine Reef and Rainforest Conservation Foundation Inc. (PRRCFI), on Tuesday raised concern over the sale of juvenile blacktip reef sharks in southern Negros Occidental, and called on local governments to regulate, if not ban, shark fishing.

On Aug. 18, juvenile blacktip reef sharks about half a meter long and aged between 6 months to 2 years old, were again seen being sold at Sipalay City public market for P100 per kilogram, he said.

He said while there is not enough data yet to support a declaration of juvenile sharks as a protected species, “we could take the precautionary approach.”

“Our lack of knowledge of a species should not prevent us from protecting them,” he said.

“We don’t want to act when it’s too late,” Albao said. “We cannot bring back shark populations if they decrease to a degree that can no longer be controlled or reversed,” he said.

Shark meat is usually cooked with chili and coconut milk, or used as an ingredient for dumplings, while shark fins are used for soup.

A restaurant in Bacolod sells a dish made of shark meat called “linabog na bagis,” he added.

Only eight shark species and the manta ray are listed in the Convention on International Trade in Endangered Species, which makes catching these animals illegal.

Albao said Cebu has a provincial ordinance banning the sale of shark products. “We are planning efforts to lobby for local ordinances in at least regulating shark fishing,” he said.