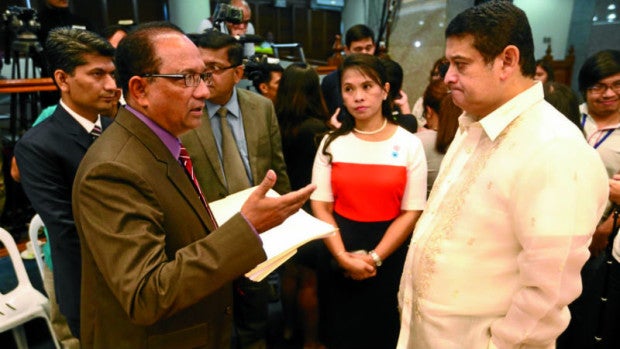 GIVE STOLEN MONEY BACK Bangladesh Ambassador to the Philippines John Gomes (left) tells Sen. Teofisto Guingona III of his government’s desire for the immediate return of part of the $81 million stolen from Bangladesh Bank that casino junket operator Kim Wong has turned over to the Anti-Money Laundering Council. LYN RILLON

The Department of Justice (DOJ) has  wrapped up its preliminary investigation on money laundering charges connected with the $81 million stolen by hackers from the Bangladesh Bank in New York and funneled through bank accounts in Manila.

Pacamarra said a resolution may be issued within the month.

The pending cases at the DOJ involves $15 million of the $81-million stolen funds.

Aside from the $15 million covered by the DOJ cases, the Philippine Amusement and Gaming Corp. recovered $2.7 million while $63 million more from the stolen money remain missing and are now being pursued by Bangladeshi officials.

All the respondents have already submitted their counter-affidavits, denying allegations of money laundering.

Former RCBC Jupiter Branch Bank Manager Deguito last May asked the DOJ to dismiss the case against her for lack of probable cause.

She denied the allegation that she facilitated the laundering of the stolen money, insisting that it was former RCBC president Lorenzo Tan who ordered her to open the four fictitious accounts where the $80,884,641.63 stolen by hackers from the Bangladesh Bank went.

Wong, meanwhile denied the allegations but pointed to Deguito as the one who facilitated the transactions. He said he has already returned to the government P38.28 million and $4.63 million he got from the laundered money.

The Philrem executives–president Salud Bautista, chairman of the board and treasurer Michael “Concon” Bautista–and anti-money laundering compliance officer Anthony Pelejo also sought dismissal of the AMLC complaint arguing that AMLC’s complaint-affidavit did not specify any predicate crime by the alleged source of the money, a key element of money laundering.

The respondents further claimed that the hacking of the Bangladesh Bank did not happen in the Philippines, which goes against the principle of “territoriality” in the country’s criminal law, meaning the alleged crime should have been committed in the Philippines.

Philrem was the firm tapped to deliver the money from the Rizal Commercial Banking Corp. Jupiter Makati branch to local casinos where the funds disappeared. CDG/rga

READ: Kim Wong hands over another P250M to AMLC