Cemetery for heroes or soldiers’ memorial? 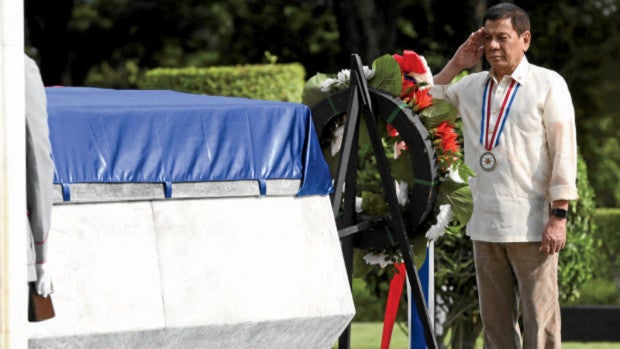 Is Libingan ng mga Bayani a cemetery for heroes or a memorial for soldiers?

Justices zeroed in on this question on the first day of oral arguments on Wednesday in the Supreme Court on a petition by victims of martial law abuses opposing President Duterte’s decision to allow the interment of the dictator Ferdinand Marcos, frozen in a temperature-controlled crypt in his Ilocos Norte hometown, at Libingan.

Mr. Duterte, fulfilling an election campaign promise, has authorized the interment of Marcos at Libingan. He said he was simply following the law, which allows former soldiers and Presidents to be buried there.

Marcos, who was ousted in the 1986 People Power Revolution, died in exile in Hawaii in 1989. His remains are displayed in a glass coffin in Batac since the body was returned to the country 23 years ago. His family wants him buried at Libingan.

On Aug. 23, the high court issued a status quo ante order suspending for 20 days preparations for the burial, planned for Sept. 18.

Wednesday’s six-hour proceedings heard lawyers for several petitioners, mainly victims of abuses under martial law, clamped by Marcos on the nation in 1972 amid a raging communist rebellion to overthrow the government.

The petitioners claimed the emergency was instituted to perpetuate Marcos in power and enable him to amass great wealth.

The court also heard testimony of abuses from martial law victims led by Etta Rosales, former chair of the Commission on Human Rights.

The next hearing was scheduled for Sept. 7 to hear the side of the government and the Marcos family.

Rep. Edcel Lagman, whose brother was a victim of involuntary disappearance, urged the court to prevent “a national tragedy” by prohibiting the  burial, saying it “would glorify a dictator, distort history and aggravate the injustices to human rights violation victims.”

Lagman noted that the Supreme Court had confirmed the Marcoses’ plunder in previous cases, and that Switzerland had turned over $356 million hidden by the Marcoses in Swiss banks.

He also pointed out that the US District Court of Hawaii validated the brutalities of martial law when it ruled in 1992 that Marcos was culpable of human rights violations against around 10,000 claimants and held the Marcos estate liable for damages.

The Marcos family’s agreement 23 years ago with then President Fidel Ramos’ administration that the dictator’s remains be flown directly to his northern hometown and be given a quick burial also remains binding and precludes a hero’s burial, Lagman said.

Mr. Duterte claimed the Ramos deal with Marcos did not have a legal basis and that the “yellow forces” of the past Aquino administrations at the forefront of the opposition to Marcos’ burial at Libingan, should have crafted legislation that would prevent the interment.

Former Akbayan Rep. Ibarra Gutierrez said the President’s discretion on the burial was not absolute and was bound by several laws and numerous decisions of the Supreme Court.

“It is crystal clear that the burial of Marcos at (Libingan) does not serve any legitimate public purpose,” Gutierrez said. “Most certainly, Marcos had no contribution to Philippine history and culture that is worthy of recognition.”

Drawing from the cemetery’s historical background, De Castro pointed out that former President Ramon Magsaysay renamed what was originally called Republic Memorial Cemetery in order to reflect that those interred there were soldiers who died during the war and served the military establishment.

She said that people buried there mostly had military connections, and the interment of those without background was only allowed later.

The fact that it is not administered by the National Historical Commission of the Philippines also reinforces its military character, she said.

Justice Diosdado  Peralta also said Republic Memorial Cemetery came first as it was built in 1947, a year before Republic Act No. 289 was enacted in 1948.

This law is the crux of the arguments of the petitioners contesting the “hero’s burial” for Marcos, saying the cemetery is reserved for heroes worthy of “inspiration and emulation.”

Former Bayan Muna Rep. Neri Colmenares said the heroes’ cemetery was not meant to just be a war memorial.

He argued that the insertion of Presidents into the rules governing Libingan made it more than that.

“Let’s not get lost in the word ‘hero’ but focus on the standard that he is worthy of  ‘inspiration and emulation,’” he said.

He argued that “the interment of one scoundrel does not justify adding one more scoundrel” in Libingan and stressed the importance of symbolism.

“The victims will long be forgotten, but their tormentor is now in a place where he is called worthy of esteem,” he said.

Justice Alfredo Benjamin  Caguioa questioned the position of the Office of the Solicitor General (OSG) that RA 289 did not apply to Libingan.

The OSG said in its Aug. 22 comment that RA 289 applied to a National Pantheon that was supposed to be built along East Avenue, Quezon City, but did not push through.

Lagman said that even if the National Pantheon was not built in Quezon City, “the change in venue or the site will not abrogate the principal preamble of the law.”

Caguioa, who served as justice secretary of former President Benigno Aquino III, pointed out that Presidential Proclamation No. 208, issued by Marcos himself in 1967, considered Libingan a “national shrine.”

Lagman replied that the requirement of being worthy of inspiration and emulation would thus still apply to the cemetery.

Caguioa noted that Presidential Decree No. 105, which was also signed by Marcos in 1973, declared national shrines sacred and hallowed places and prohibited their desecration.

“This piece of legislation appears to be relevant, would you agree?” he asked Lagman, who concurred that burying Marcos at Libingan “would desecrate the cemetery of heroes.”