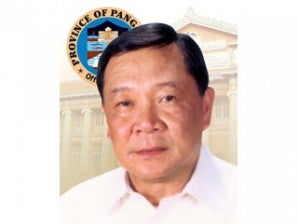 The former Pangasinan governor was named in a so-called “drug matrix” presented by President Duterte last week to illustrate the network of government protectors for drug lords inside the New Bilibid Prison (NBP), allegedly led by Sen. Leila de Lima.

In a press statement, Espino said he “categorically denied” any involvement in illegal drugs to the President and told the Chief Executive of his readiness to face his accusers and all their evidence and witnesses.

“In our meeting, the President granted my request for an immediate, thorough investigation and validation of the matrix that had been submitted to him,” said Espino.

Espino said that he was generally out of favor as governor during the six years of the Aquino administration. He said the government then was either ” lukewarm or hostile” to him as his province had no permanent Philippine National Police provincial director.

He said he could not have been part of a conspiracy with De Lima because the then justice secretary led a “sinister plot” to bring him down during the 2013 campaign with the filing of plunder, economic sabotage, graft and murder charges.

Espino said the “fabricated murder charge” against him dragged on until August 2015 with the release of the Department of Justice resolution absolving him of the killing of Infanta Mayor Ruperto Martinez.  Espino has been cleared of all the other charges except for the plunder charge over the black sand mining in Lingayen Gulf.

Espino revealed that his mother had suffered from the negative campaign generated by De Lima’s charges against him. He said his mother has been bedridden for the last four years since she watched then Interior Secretary Mar Roxas “appearing on television telling the whole nation for me to get the best lawyer of the land for I will surely land in jail.”

“I cannot imagine how my name landed in the NBP matrix with Senator De Lima in the first place. Aside from our unpleasant relations, I do not even now anyone at all inside the NBP and I do not know that driver (alleged De Lima lover, Ronnie Palisoc Dayan) and barely know retired (Bureau of Corrections) Director Frank Bucayu,” said Espino.

A former police officer, Espino said that he has consistently worked against illegal drugs initially by undergoing special narcotics investigation courses in the military and training courses in Australia, the United States and England while working as narcotics regional chief in Central Luzon and Philippine Constabulary in the 1980s.

Aside from arresting top communist rebels such as Dante Buscayno, Satur Ocampo, and Ed de la Torre, Espino said that he was also responsible for the capture of international drug lord John Jone who operated inside the former American military bases in Subic and Clark.  SFM