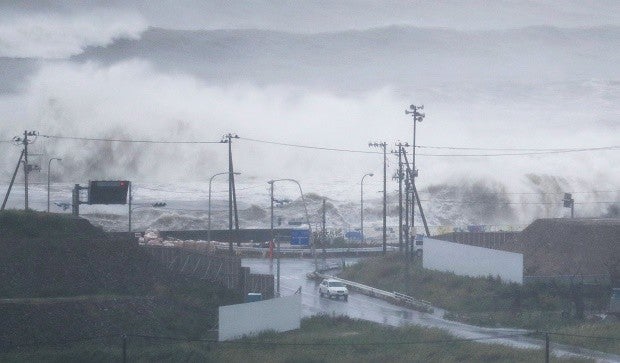 Waves crash against a coast in Ishinomaki, Miyagi prefecture, northeastern Japan, Tuesday, Aug. 30, 2016. A typhoon is about to barrel into northern Japan, threatening to bring floods to an area still recovering from the 2011 tsunami. Typhoon Lionrock has already paralyzed traffic, caused blackouts and prompted officials to urge residents to evacuate. AP

TOKYO — NHK says nine bodies have been found at a nursing home flooded by heavy rain left by powerful storm in northern Japan.

The Japanese national broadcaster said the bodies were found Wednesday morning in Iwaizumi town, where police were investigating the flooding at another facility.

The storm made a landfall Tuesday night in the region, triggering mudslides, damaging buildings, roads and bridges, while paralyzing traffic and causing blackouts.

The northern region was still recovering from the damage caused by the 2011 tsunami and earthquakes.