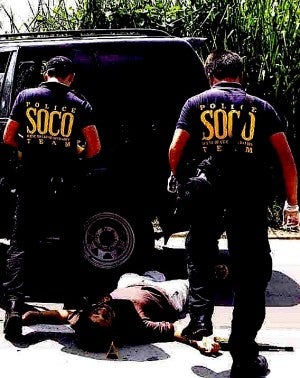 MANILA — A drug pushing suspect believed to be a gun-for-hire too was killed in an encounter in Quezon City on Monday afternoon while another suspected drug pusher was arrested by policemen.

The still unidentified fatality was killed during an operation of policemen from the Quezon City Police District Station 6 at Fort Magsaysay along Luzon Avenue in Barangay Holy Spirit at around 4 p.m. on Monday.

Police said they received information that armed men led by an alias “Amir” were seen in the area. Station 6 operatives immediately checked the location where they were met with gunfire from suspects.

Recovered from the unidentified fatality was a .38 gun, a .45 firearm and eight sachets of shabu (methamphetamine hydrochloride).

Another suspect, identified as Eugene Guico, was arrested after the operation. The cops were able to recover three sachets or shabu from his possession.  SFM