P75 a day for food in jail urged 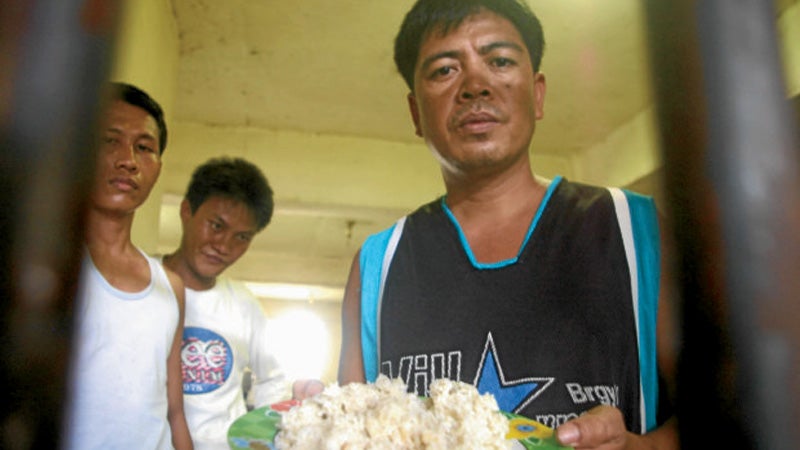 BADLY COOKED This photo, taken in 2008, shows inmates complaining about rice not properly cooked at Iloilo Rehabilitation Center in Pototan, Iloilo province. Sen. Loren Legarda, chair of the Senate committee on finance, proposed a higher food allowance for prisoners during a hearing on the Department of Justice budget. INQUIRER PHOTO

Surprised at the meager funding, Sen. Loren Legarda has called for a higher food budget for the country’s prisoners, saying they deserve “humane” meals even while serving time for criminal offenses.

During a budget briefing with Department of Justice (DOJ) officials on Thursday, Legarda, chair of the Senate committee on finance, broached the idea of raising the budget proposal for prison food from the current P50 to P75 a day for each prisoner.

“How does a person eat three meals a day with P50? That’s too small. Let’s have a more humane rate,” Legarda said.

He said he hoped there would be sufficient funds to raise the meal allowance to P75, or P25 a meal.

“The government has such a huge budget. We should be feeding them humane food even while they are in prison,” Legarda said.

The DOJ is the mother agency of the Bureau of Corrections (BuCor), which administers seven prisons across the country housing 44,790 inmates.

Amid the Duterte administration’s relentless campaign against drugs, the number of prisoners is likely to increase with the entry of new drug convicts.

As of Aug. 22, Philippine National Police data showed a staggering 673,978 surrendered users and pushers from July 1, and 11,784 arrests within the same period.

Already, detention centers administered by the Bureau of Jail Management and Penology are brimming with drug suspects facing trial. If convicted, these detainees will find their way to BuCor prisons to serve time.

At the current P50 daily, the BuCor food budget runs up to P2.239 million a day, or more than P800 million a year. Increasing the meal allowance to P75 a day would hike this figure to P3.359 million daily, or P1.226 billion for the entire year.

The proposed P2.158-billion BuCor budget for 2017 already represents a 9-percent increase from the current P1.944 billion, but this still does not take into account the proposed food budget hike.

“In your proposal, did you increase the rate?” Legarda asked Aguirre.

“Actually, the P50 has been the rate … but actually, we hope to increase it to P75 per day. We are going to conduct a bidding in this regard,” the justice chief responded.

Legarda recognized that the proposed increase would entail a lump-sum hike, so she also proposed for the BuCor to plant vegetables in prison compounds to augment the food supply.

Under the proposed 2017 BuCor budget, P654 million is for allocated for general administration and support, which includes expenses for running prisons. This represents a 6-percent increase from the current budget of P616 million.

The draft budget also contains a major increase in the budget for the construction of perimeter fences: P32 million for next year, from the current allocation of P3 million.