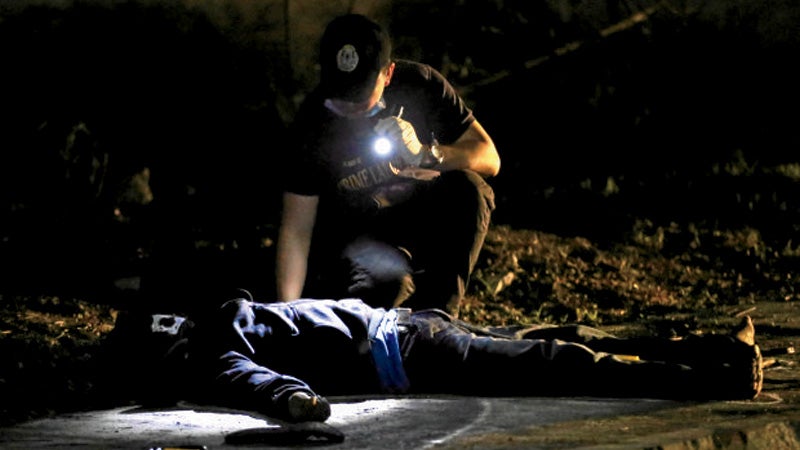 ANOTHER VICTIM Policemen inspect the body of one of two men riding on amotorcycle who were shot and killed during an encounter with lawmen along C3 Road in Caloocan City on Sunday. Packets of “shabu” (methamphetamine hydrochloride) were reportedly found on the dead men. RAFFY LERMA

CANBERRA—Since President Duterte launched his war on drug syndicates on July 1, he has plunged the Philippines into a multitheater conflict against a broad front of international institutions, including the United Nations, its human rights rapporteurs, human rights watchdog groups, Amnesty International,  the country’s Chief Justice and other domestic critics of his violence-driven campaign.

Hundreds of suspected drug dealers have been killed in alleged extrajudicial executions as the administration pursued the President’s campaign promise to exterminate the drug menace in three to six months of his presidency.

This campaign has drawn international condemnation for its summary slaughter of suspects, disregarding human rights  and due process under the rule of law. It has been fueled by the singular slogan: “Kill  the drug dealers!”

The death toll of this extermination campaign has been appalling and has shocked democratic communities around the world.

It has also branded the Philippine as a pariah country among democracies for embarking on the butchery of its people as the centerpiece policy of governance.

Crime statistics released by the Philippine National Police  paint a gruesome picture of the brutality of this bloodbath and the damaging impact of this campaign on the country’s democratic institutions.

PNP  Director General Ronald “Bato” dela Rosa, said last week the war on drugs would continue and “more lives will be lost along the way,” whether that of criminals or of law enforcers. Underscoring the ruthlessness of the campaign, Dela Rosa  called on his men to continue the fight, “survive gunfights” and “stay alive” when he visited the wake of SPO4 Edmar Bumagat who was killed in a drug-bust operation in Makati City.

Bumagat was part of team that arrested Angelo Tampos, a murder suspect. According to the PNP, Tampos allegedly grabbed the policeman’s gun and engaged him in a scuffle until the gun went off. Bumagat was hit in the head while Tampos was killed by another policeman.

“We are far from over,” Dela Rosa told reporters. “We have just finished the first month of the war against drugs. We still have  five months to go. More lives will be lost along the way.”

‘Are you willing to kill?’

Talking to policemen in Bacolod City last week, Dela Rosa challenged them, “Are you willing to kill?”

The day after, he urged suspected drug users and pushers in Bacolod to go to the houses of drug lords, douse them with petroleum, and burn them. He said most important in the war against illegal drugs was the readiness to kill.

“Don’t get killed. You need to be alive,” he said in a speech before policemen, officials and other guests during the commemoration of the 115th PNP anniversary at the regional police  headquarters at Camp Martin Delgado.

He also lambasted the Commission on Human Rights (CHR) by telling policemen to stay alive because the CHR will not feed and send their children to school if they die.

The disclosure by Dela Rosa that there had been at least 1,067 killings by unidentified people and over 712 killings by police since July 1 came under heavy fire from Amnesty International, which said the toll was “a terrifying indication that the authorities are grossly failing in their obligations to respect and protect the right  to life.”

“This risks the further breakdown of rule of law in this country. The state has a duty to protect the people from all forms of violence, including an obligation to promptly, and independently and impartially investigate such killings and bring perpetrators to  justice,” Amnesty added.

It pointed out that  Dela Rosa at the Senate inquiry pledged that all allegations of murder and extrajudicial executions by the police would be investigated. However, Amnesty noted that “it is unclear if there will be independent oversight of investigations of such killings.”

It therefore called on the authorities to ensure the establishment of an independent police complaints commission to be set up.

The commission should have the mandate to receive complaints and other reports on human rights violations committed by the police which will be fully independent and free from the influence of the PNP.