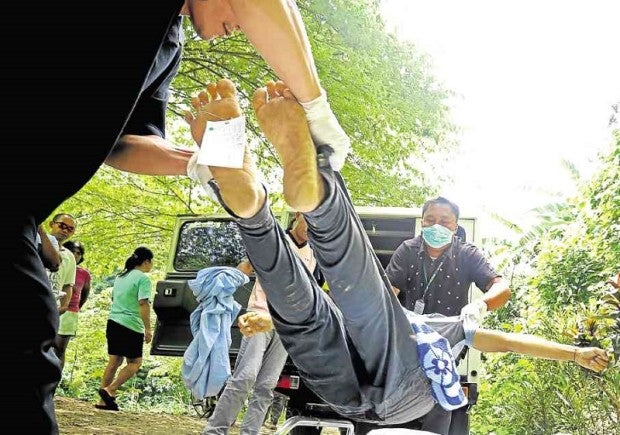 MORTUARY workers in Cebu City carry the corpse of a drug suspect who was killed in the ongoing war on drugs by the Duterte administration. The scene has become a familiar one in many places in the country, raising alarm from human rights groups and sowing fear in poor communities where the drug trade has thrived for so many reasons. TONEE DESPOJO/CEBU DAILY NEWS

Cristine Jackson was excited: she could finally walk down the aisle with her partner of five years, Jason Buclatan.

But on July 29, she lost her groom-to-be when unknown men fired at Buclatan’s vehicle near Daniel Z. Romualdez Airport in Tacloban City, killing him and his companions, Rowena Rosales and Chery May Mantile.

Almost two months after the attack, police investigators had yet to identify the killers and establish the motive despite their belief that the case was drug-related.

“All I want is justice (for) my husband,” said Jackson, 31. She added that she did not know that her 35-year-old common-law husband and father to their 2-year old daughter was into drugs.

In Iloilo City, Rotchel Navales is pondering the future of her seven children after her common-law husband, Sherwin Taasan, was killed by two unidentified men.

On June 3, Taasan was forcibly taken by the men from a jeepney. His body was found the next day on a grassy lot in Leganes town, 11 kilometers north of the city, bearing signs of beating and his hands tied behind the back with a shoelace.

The victim had six bullet wounds, including two in the head.

“But why do they have to kill him?” Navales said, even as she admitted that he was into petty crimes and arrested several times for snatching.

Jennifer Abastas also lost her live-in partner, Presco Cabingatan, in what police said was a clash during a fiesta celebration in Barangay Buhisan in Cebu City.

Cabingatan, 33, a “habal-habal” (motor cycle-for-hire) driver, had a homemade .38 caliber revolver and tried to shoot it out with policemen who returned fire, SPO1 Noel Caretero of the Punta Princesa police station said. The driver died from multiple bullet wounds.

Police said two small sachets of suspected “shabu” (methamphetamines) were retrieved from Cabingatan, who was allegedly on the list of drug suspects.

At least 95 suspected pushers were killed in the Visayas region, in what police said were gunfights with law enforcers from July 1 to Aug. 22, since President Duterte began a bloody war on illegal drugs shortly before he took office on July 1. They included 69 in Central Visayas, 18 in Eastern Visayas, and eight in Western Visayas.

At least 76 more were killed from July 1 to Aug. 22, this time by unidentified assailants—65 in Central Visayas, nine in Eastern Visayas, and two in Western Visayas.

Similarities in the cases

There are several similarities in the cases. The dead were poor people who fought it out with police or were executed by vigilantes, their bodies dumped in isolated areas, their hands and feet tied, and bearing notes naming them pushers.

Take the case of George Gallaza Jr., 29, who was found dead along the national highway in San Joaquin town, Iloilo province, on July 28. His face and legs were wrapped with packing tape. Inside his shirt were two placards, one reading: “I’m a pusher and thief. Don’t be like me.”

The Philippine National Police (PNP) has defended the killings resulting from police operations.

“If their lives are in danger, our policemen have to defend themselves. When the smoke clears after an encounter, drug pushers should drop to the ground while policemen are standing up,” said Chief Supt. Noli Taliño, Central Visayas police director.

It would be better for them to “neutralize” criminals in self defense than be killed when criminals fight back, he said.

There were signs of an overkill, said Abastas, who lost her partner, Cabingatan, in a “clash” in Cebu City. The man’s face had deep slash wounds and his body had graze marks.

Abastas said that even if she could file a complaint against the police, she believed it would not prosper. “We are poor. We cannot afford to fight the government,” she said.

Most of the families of the dead are reluctant to file charges.

Supt. Gilbert Gorero, spokesperson of the Western Visayas police office, said police operations leading to the deaths of suspected pushers were automatically reviewed. Results of the investigation have not been made public, however.

Taliño said he had ordered all police offices to probe cases of summary executions, including those believed to be perpetrated by policemen.

Killing criminals is wrong and extrajudicial killings must stop, he said, as he welcomed initiatives undertaken by the Commission on Human Rights (CHR).

The CHR is currently handling eight cases in Central Visayas and 15 in Western Visayas.

Edgar Luis, the agency’s chief investigator in Western Visayas, said the number of cases being probed simultaneously was straining the efforts, funds and resources of his office. “This is the most cases in a short period that I have encountered since I joined the CHR in 1988,” he said.

CHR personnel have also been hindered by the reluctance of families of those who were killed to file complaints.

Luis lamented that even as the death toll in the war on drugs was rising, there appeared to be no outrage against the killings.

It could be due to the feeling of security prevailing among people who are often victims of crimes, like robbery, according to businessman Eugene Tan of Tacloban City .

“Killing, even of criminals, is a crime unless (the death penalty) is legalized. Vigilantism will spur many human rights violations even if the intentions are well,” said David Bermudo, CHR director for Western Visayas.