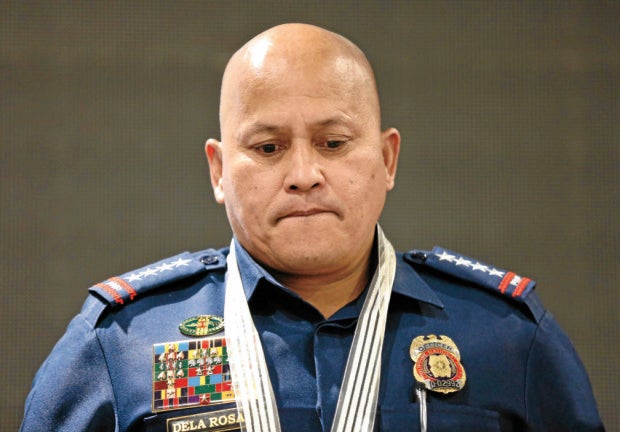 “I said that because I felt bad. I was angry when I saw how the pushers and users (who surrendered) looked like zombies,” Dela Rosa told reporters at the Camp Martin Delgado, the police regional headquarters here, on the sidelines of rites commemorating the 115th anniversary of the PNP.

“I am sorry if I said something undesirable. I am only human who gets angry,” Dela Rosa said.

In a speech before around 1,300 suspected users and pushers in Bacolod City on Thursday, Dela Rosa decried how drug lords enrich themselves at the expense of petty pushers and users.

“You know who are the drug lords here. Go to their house, douse it with gasoline and light it up. Show them your anger,” he said.

Dela Rosa said he became emotional when he saw the suspected pushers and users.
“They look like zombies. I hope they can recover,” he said.

In his speech in Iloilo City, he urged policemen to pursue the war against illegal drugs “within the (bounds) of the law and (respecting) human rights.”

But in the same speech he also challenged the policemen if they were ready to kill in the fight against illegal drugs.
“Are you ready to die? But first of all, before dying, are you willing to kill? This is what is important,” he said in his speech.

READ: Dela Rosa to Western Visayas cops: ‘Are you willing to kill?’

At about the same time he was delivering his speech, police gunned down a suspected drug pusher in Pavia town in Iloilo.
Another suspected pusher was also gunned down in Iloilo City Thursday evening just hours before Dela Rosa’s visit.

Policemen shot dead Welner Gomez around 10:50 a.m. on Friday during a buy-bust operation in Barangay (village) Jibao-an in Pavia town after he allegedly fired at operatives from a composite team involving the municipal, provisional and regional police offices.

Gomez was brought to a hospital but was declared dead on arrival by physicians.

Police recovered a .45-caliber pistol and sachets of suspected methamphetamine hydrochloride or “shabu.”

Four companions of Gomez were arrested. They were identified as Francis Al Tijam, Mary Grace Padernal,Yannah Gabio, and Lester Lope.

Gomez is considered a “high-value target” and is allegedly a member of the Prevendido drug group, according to a report of the Police Regional Office 6.