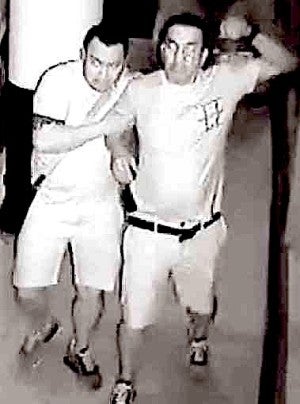 But one of their lawyers stressed that they went to Sueno’s office in Camp Crame not to surrender but to clear their names and seek assistance due to security risks.

“They do not need to surrender because there is no pending arrest warrant against them,’ said lawyer Gualberto Cataluña, one of Odicta’s lawyers.

The Philippine Drug Enforcement Agency has identified Odicta as “Dragon” and the head of one of two main drug groups operating in Iloilo.

Odicta who operates the Melvin taxi fleet, van service as well as a restaurant, has repeatedly denied allegations he is a drug trafficker.

He is facing criminal charges for leading a group of men who allegedly attempted to barge into radio station Aksyon Radyo Iloilo, which has been airing reports and commentaries against illegal drugs.  SFM 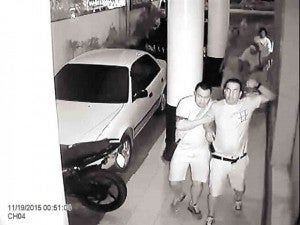 This is the original video grab by the Aksyon Radyo Iloilo of a CCTV footage showing buisnessman and suspected drug trader Melvin Odicta Sr. and his son Melvin Jr. trying to enter the radio station in Iloilo City on Nov. 19, 2015.   The Philippine Drug Enforcement Agency was the agency that identified the two. (VIDEO GRAB FROM AKSYON RADYO ILOILO)