What to do with those lampposts 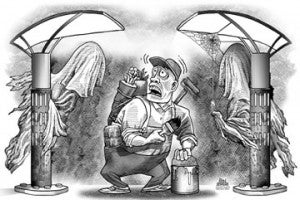 The Cebu City government’s request to use the decorative lampposts as part of the city’s beautification program may prove sound so long as city officials don’t press their demand for its removal.

As reiterated by the Ombudsman-Visayas, the decorative lampposts are needed as evidence in their investigation into its alleged overpriced purchase. The Ombudsman had already been under pressure from the Sandiganbayan to further build their cases after some of them were remanded or sent back for reinvestigation.

The graft case involved the contractor, several officials of the Department of Public Works and Highways (DPWH) and two former mayors. It had been four years since the graft case broke out yet the Ombudsman-Visayas and by extension the Sandiganbayan are no closer to resolving the case than day 1 when the cases were filed.

Over time the decorative lampposts have been vandalized and are now shells of what they once were, both in appearance and in value. Anyone looking at these lampposts would daresay that all they’re good for are scrap metal, which can be recycled at the dumpsite.

Yet officials of Metro Cebu, including Cebu City, cannot do anything about removing them from their streets. That is why Rama came up with this practical yet bright idea of working around the lampposts by placing hanging flowerpots or flowers on them, making them less of an eyesore and more a part of the refurbished, revitalized Cebu City.

We could only hope that Cebu City officials don’t do anything radical with the decorative lampposts lest their remaining value as evidence in a protracted, long-delayed graft case is diminished.

Hang potted plants on them? Perhaps paint them with colorful designs similar to those done by amateur artists on walls bearing messages like world peace, “don’t do drugs” and other such high moral themes?

Certainly fixing them is out of the question since doing so would not only be expensive, but would also serve as a downright justification of the anomalous purchase.

As far as we can tell, the Ombudsman-Visayas isn’t lukewarm to the idea but has referred the request of the city officials to the Sandiganbayan for deliberation. While their presence remains an eyesore, the lampposts aren’t hopeless.

But as in anything connected with the case, bureaucracy remains a stumbling block in the approval of Cebu City Hall’s simple request. Which is a crying shame both for the city residents and the officials who may or may not have agreed with the lamppost purchase but were forced to go along with it and are now reminded daily of the folly and greed that were perpetrated by the people behind their acquisition.