Iranian navy in ‘unsafe’ intercept of US destroyer — official 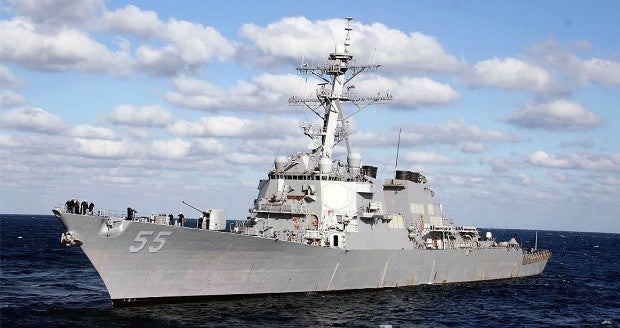 The USS Nitze, an Arleigh Burke class guided-missile destroyer, is seen in this US Navy photo. US defense officials said on Wednesday, August 24, 2016, that four Iranian military vessels made ‘unsafe’ intercepts of the Nitze while it was sailing in the Strait of Hormuz. The Nitze had to change course several times to avoid colliding with the Iranian vessels, officials said. US NAVY PHOTO

WASHINGTON, United States — Four Iranian military vessels sped close to two US Navy guided missile destroyers with their weapons uncovered in the Strait of Hormuz in an “unsafe and unprofessional” encounter between the longtime foes, American defense officials said Wednesday.

The USS Nitze shot warning flares, sounded its whistles and attempted unsuccessfully to communicate with the Iranian boats during Tuesday’s incident, US Central Command spokesman Commander Kyle Raines said in a statement, adding that the Iranian vessels came within 300 yards (meters) of the American destroyer. The Nitze was accompanied on its mission by the USS Mason, another destroyer.

The encounter occurred in international waters in the strait, a vitally important choke point with Iran to its north and the United Arab Emirates to the south.

The destroyer had to change course to avoid a possible collision, even though it was near offshore oil rigs.

This was not the first maritime scare between the United States and Iran.

In January, the Iranian navy briefly captured the crews of two US patrol boats that had, through a series of blunders, strayed into Iranian territorial waters.

The 10 American sailors were released within 24 hours.

“We assessed the interaction as unsafe and unprofessional due to the Iranian vessels not abiding by international law and internationally recognized maritime rules of the road as well as their high rate of closure of Nitze and disregard of multiple warnings by the ship’s whistle and flares,” Raines said of the latest incident.

“The US Navy continues to remain vigilant and is trained to act in a professional manner, and we expect the same of all nations with professional maritime forces.”