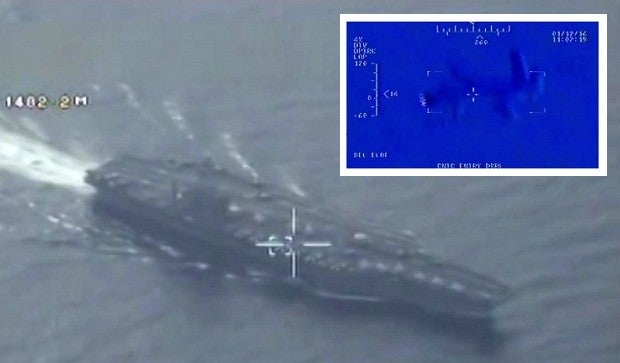 This still image made from video broadcast on Iranian State television, friday, Jan. 29, 2016, shows what purports to be footage of the nuclear aircraft carrier USS Harry S. Truman. taken by an Iranian drone (inset). Iran flew a surveillance drone over the aircraft carrier and took ‘precise’ photographs of it as part of an ongoing naval drill, state media reported Friday. The U.S. Navy said an unarmed Iranian drone flew near a French and American carrier earlier this month, but couldn’t confirm it was the same incident. AP

DUBAI, United Arab Emirates — The unarmed Iranian drone that flew over a U.S. aircraft carrier in the Persian Gulf last month is similar to those that can carry missiles and was the first to conduct an overflight of an American carrier since 2014, U.S. Navy records obtained Wednesday showed.

The Jan. 12 reconnaissance flight by Iran’s Shahed drone over the USS Harry S. Truman while a French aircraft carrier sailed nearby marked the latest tense naval encounter between the U.S. and Iran since Tehran’s nuclear deal with world powers.

It also suggests that incidents like it, as well as another that saw Iranian speedboats fire rockets near U.S. warships and commercial traffic in late December, remain a danger in Gulf waterways crucial to global oil supplies.

“You’re one broken rocket fin away from creating a serious international incident that could have had unfortunate consequences,” said Cmdr. Kevin Stephens, a spokesman for the U.S. Navy’s 5th Fleet based in Bahrain.

The Associated Press obtained video of the drone and a report about the overflight from the U.S. Navy through a Freedom of Information Act request.

The report said the drone flight happened as the Truman and the French aircraft carrier Charles de Gaulle were in international waters 89 nautical miles southwest of the Iranian port of Bushehr.

A French helicopter watched the Shahed-121 drone on the cloudy day and the U.S. Navy dispatched a Seahawk helicopter to film it as it flew over the Truman, a nuclear-powered carrier based out of Norfolk, Virginia.

U.S. and French sailors repeatedly confirmed that the drone had its “wings clean,” the report said. That means it did not carry weapons and didn’t pose a risk to the ship, Stephens said.

“They’re operating in international airspace. You can’t shoot (it) down; that would be illegal,” he said.

Shahed, which means “witness” in both Farsi and Arabic, is a name of a family of drones produced by Iran. The Shahed-129 resembles the Israeli-built, V-tailed Elbit Systems Hermes 450, according to IHS Jane’s Defence Weekly, which suggests it may have been reverse-engineered from a downed drone.

Iran’s Revolutionary Guard is using the Shahed-129 drones to support forces fighting on the side of President Bashar Assad in Syria, the semi-official Fars news agency reported last week. Jane’s, citing news reports in Iran, suggested in an article Monday that the Shahed-129 may have fired missiles in Iraq and Syria, putting Iran into an elite club of nations who have used the unmanned aircraft as a battlefield weapon.

The last Iranian drone overflight of an U.S. aircraft carrier was in September 2014 and involved the USS George H.W. Bush, according to the U.S. Navy report. That came as the U.S. and other world powers were negotiating a final agreement over Iran’s disputed nuclear program. An interim agreement had been reached to limit the program in exchange for sanctions relief the previous year, but neither side had been able to finalize the deal by a June 2014 deadline, leading talks to be extended.

In January, Iranian state television showed video it said came from a drone overflight of a U.S. carrier. The footage, which the AP could not independently verify, purported to show the drone being launched and then hovering over an unidentified carrier, a targeting bracket briefly passing over a jet parked on the deck.

P.W. Singer, a drone expert and strategist at the New America Foundation in Washington, said that while a drone can potentially guide a cruise missile, the aircraft itself didn’t pose a significant danger to the carrier.

“The drone, on its own, we shouldn’t overplay it,” Singer said. “There are very real, real threats from unmanned systems … but we don’t want to overblow these kinds of propaganda examples.”

Iran and the U.S. have faced off before in the Gulf and the nearby, narrow Strait of Hormuz, through which nearly a third of all oil traded by sea passes.

U.S. and Iranian forces fought a one-day naval battle on April 18, 1988, after the near-sinking of the missile frigate USS Samuel B. Roberts by an Iranian mine. That day, U.S. forces attacked two Iranian oil rigs and sank or damaged six Iranian vessels.

A few months later, in July 1988, the USS Vincennes in the strait mistook an Iran Air flight heading to Dubai for an attacking fighter jet, shooting down the plane and killing all 290 people aboard.

The U.S. has criticized some of Iran’s recent maneuvers in the Gulf, including what it called a “highly provocative” Iranian rocket test in December near the Truman, the destroyer USS Bulkeley, the French frigate FS Provence and commercial traffic in the strait.

A second report obtained Wednesday by the AP on that incident named the commercial ships nearby as the M/V Glovis Pacific, a car carrier, and the M/V SPF Prudencia, an oil tanker. The report suggested the rocket fire by five Iranian speedboats in an international shipping lane after 23 minutes’ warning was meant to “intimidate” the U.S. warships — a test Stephens called extremely dangerous given the nearby military and commercial traffic.

Last month, Iran seized 10 U.S. sailors in the Gulf after their two riverine command boats headed from Kuwait to Bahrain had ended up in Iranian territorial waters after their crews “misnavigated,” the U.S. military said. The crews were taken to a small port facility on Farsi Island, held for about 15 hours and released.