'Bato' tells Antipolo cops: You will answer to me | Inquirer News

‘Bato’ tells Antipolo cops: You will answer to me 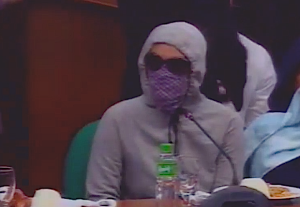 Mary Rose Aquino testifies during a Senate inquiry on Aug. 22, 2016, how her parents — both police assets and re-sellers of seized shabu — were kidnapped and murdered by members of the Antipolo City police. (SCREENSHOT OF INQUIRER.NET VIDEO/ MAILA AGER)

MANILA — Philippine National Police Director General Ronald “Bato” Dela Rosa has faced two of the Antipolo City policemen accused by a woman during a Senate inquiry of having kidnapped and killed her parents who were police assets while doubling as sellers of seized shabu.

In their meeting at the Rizal Provincial Police Office in Taytay , Rizal, last Tuesday, the PNP chief warned PO1 Reynald Rabe and PO2 Dennis Malabanan that they would be dismissed from the service and charged in court if the claims of the Senate witness, Mary Rose Aquino, were found to have basis.

“If you’re a good cop, I’ll be with you wherever this leads. If you did wrong, if this affidavit of the daughter were true, you would really answer to me,” Dela Rosa told Rabe and Malabanan.

The two vehemently denied being involved in illegal drugs, saying they were determined to clear their names.

Rabe, Malabanan and another policeman named by Aquino in her affidavit as PO2 Dave Barcelo were ordered administratively relieved and told to report to the administrative holding unit at the PNP headquarters in Camp Crame, Quezon City.

The other policemen identified by Aquino in her affidavit were PO1 Nathan Ho, PO1 Gamad, PO2 Torres, who have been absent without official leave (AWOL). Another policeman surnamed Alata has been dismissed while Chief Insp. Dave Duque has been transferred to another post.

Aquino claimed Torres and Rabe were the ones who summoned her parents, Rodelio and Rosalie Campos last June 20 before they were found dead days later.  The witness said her mother also sent an uncle a hastily composed text message warning that if something happened to her, a policeman named Hong or Ong did it.

Aquino said 20 to 30 policemen used to come to their house in Antipolo to turn over shabu (methamphetamine hydrochloride) seized during operations. She said her parents repacked and resold the drugs and then turned over the proceeds to the police. She said several policemen also did pot sessions in their house.

Dela Rosa said the PNP’s internal affairs service was looking into the matter and vowed to punish all the policemen involved.  SFM/rga