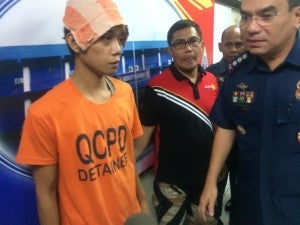 MANILA — Bothered by his conscience, the suspect in the killing of a St. Luke’s Medical Center staff nurse last week has surrendered to the authorities claiming he did not intend to kill the victim but had only wanted to rob some money to buy alcoholic drinks.

The victim was found dead with multiple stab wounds in the body early Saturday, inside her dorm room. Her housemates said they heard the victim moaning in pain prompting them to alert the house caretaker.

Guarin, whose house is just next to the boarding house of Paz along Dona Juana Rodriguez Street in Brgy. Kristong Hari, claimed that he climbed to the room of the victim on the second floor and entered by destroying the jalousie window. He said he was so drunk at that time and wanted more alcohol to drink but did not have the money to buy.

“I just wanted to get some money. I did not intend to kill her,” Guarin said noting that when he was opening one of the bags of the victim, Paz woke up and started shouting.

Guarin said he panicked. “I grabbed the knife inside her room and stabbed her,” Guarin added. Asked why he stabbed Paz 19 times, the suspect said he was “not on his right mind” because of the effect of the alcohol and that the victim fought it out with him.

Aside from being drunk, QCPD chief Guillermo Lorenzo Eleazar said Guarin was also under the influence of drugs. His drug test results, which came out on Wednesday, turned out positive, the police chief said.

Eleazar said he was also among those who surrendered last July 15 under the police’s Oplan Tokhang.  Under the PNP campaign, policemen visit the homes of suspected drug users and encourage them to surrender and undergo drug rehabilitation.

Despite the positive drug test results, Guarin denied he went back to using illegal drugs after surrendering under Oplan Tokhang. “I already stopped last April and surrendered because I do not want to be a victim [of the killings],” he added.

The suspect was not able to get any item from the victim because he hurried to leave the room after he stabbed Paz on her head, neck and body.

Brgy. Kristong Hari councilor Rogelio Hablo, to whom the suspect surrendered said he has known Guarin since he was a kid. “He is a good person. I think it was just the influence of drugs and alcohol that pushed him to do that,” Hablo noted.

He explained that a day after the Paz’s slay, they asked all those who surrendered under Oplan Tokhang to show up at the barangay hall to check who among them had wounds on his body. The police had reported that there was blood splatter from the killer in the crime scene.

“Guarin appeared that day but he was wearing a jacket and he immediately left after enlisting his name,” Hablo said noting that he already sensed something different from the suspect since that encounter.

When the suspect sent surrender feelers, the councilor said he encouraged him to admit the crime and surrender to the barangay. A raid of the suspect’s house led authorities to discover two bloodied black short pants. However, investigators said they could not locate the kitchen knife he used to kill Paz since Guarin said he threw it into a creek after committing the crime.

Eleazar said on Wednesday that police would file a case of attempted robbery with homicide against Guarin.
SFM