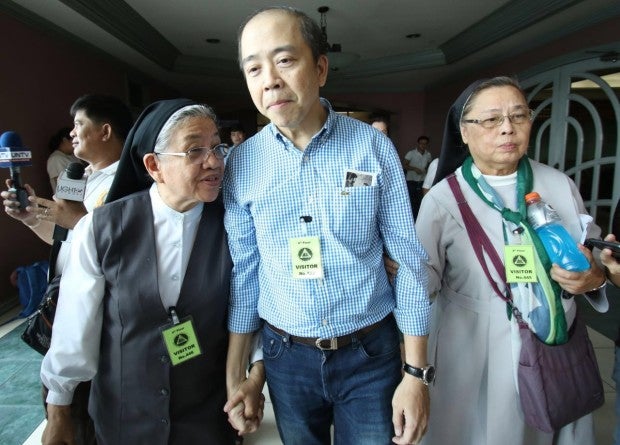 The Sandiganbayan convicts Jun Lozada of graft and sentences him to six to 10 years in prison. RICHARD A. REYES/PHILIPPINE DAILY INQUIRER

(Updated)  It’s the whistleblower who was found guilty of corruption.

The Sandiganbayan Fourth Division on Tuesday convicted whistleblower Rodolfo “Jun” Lozada Jr. of graft over a corrupt act when he was president and chief executive officer of the state-owned Philippine Forest Corp. (PFC) in 2007 and 2008.

Surrounded by nuns who supported Lozada since he turned whistleblower, Lozada said he felt like hitting rock bottom after being convicted of graft while major players in the anomalous National Broadband Network-ZTE deal case, where he testified against former Commission on Elections chairman Benjamin Abalos and former First Gentleman Mike Arroyo, remain free.

Around him, nuns shed tears. One nun called someone up over the phone and broke down while sharing the bad news. Her fellow sisters shunned cameras catching the moment.

Lozada said he had no political clout or power to win a graft case before the Sandiganbayan, comparing it to the trial to death of Jesus Christ by the Pontius Pilate.

“Si Pilato, alam niyang inosente si Kristo. (Pilate knew that Christ was innocent.) Because of political consideration, he just has to wash his hands and crucify him. Ganun talaga. Wala naman akong kakayahang pulitika, mag-appoint ng sino, o pwedeng ibigay na pabor na pwedeng maging… wala (It’s really like that. I don’t have any political power to appoint anyone nor do I have the ability to give favors…none) ,” Lozada said.

“Ito siguro talaga ang kapalaran ng isang pangkaraniwang Pilipino (This must really be the fate of the ordinary Filipino),” he said.

Lozada said he felt his hopes were dashed when he was convicted while Abalos, who he claimed was the main player in the NBN-ZTE anomaly, was acquitted by the same court from graft.

Abalos was found not guilty of violating Section 3(h) of the Anti-Graft and Corrupt Practices Act, which penalizes having financial and pecuniary interest in the transaction between government and the Chinese corporation ZTE, as the prosecution failed to prove Abalos brokered the deal for a fee.

“Kami na ung nagsumbong, kung ano ang katiwaliang ginagawa sa gobyerno, kami pa yung convicted (It was us who exposed the wrongdoings of the government and yet we were the ones convicted),” he added.

The anti-graft court found Lozada guilty of one count of graft for violation of Section 3(e) of the Anti-Graft and Corrupt Practices Act for causing undue injury to government over an anomalous land deal when he was president and chief executive officer of the state-owned Philippine Forest Corp. (PFC) in 2007 and 2008.

Lozada was charged with graft for unlawfully awarding the lease contract of 6.599 hectares of public land under the PFC’s Lupang Hinirang Program to his brother Jose Orlando Lozada, foregoing the regular application process and giving unwarranted benefit to his brother to the prejudice of government.

They were sentenced to suffer six to 10 years imprisonment and perpetual disqualification from public office.

In convicting Lozada, the court cited Lozada’s statement during a Senate hearing on the NBN anomaly admitting that he leased lands to his brother and to a firm connected to him. But Lozada later denied this during trial, noting that what was only awarded to his brother and firm were notices of awards which simply notified the applicants of the reviewed application.

The court said Lozada was guilty of the graft offense involving his brother because he awarded the land to Orlando after the latter paid a P13,198 lease despite not going through the usual application process, such as pre-qualification, auction and award.

The court said even though PFC personnel need not go through the usual auction process, Orlando is a consultant for the PFC and therefore could not be considered an employee due to the non-existence of employer-employee relationship.

The court said Lozada Jr. acted in evident bad faith and manifest partiality when he allowed his brother to lease the land despite not being qualified.

“Accused Orlando Lozada, a consultant of PFC, was allowed by the said government-owned and controlled corporation to submit his application. The PFC processed the same and in fact allowed him to pay. He was then issued by the President of PFC, his very own brother and accused Rodolfo Lozada, a notice of award knowing fully well that his brother was not an officer, staff or employee of PFC,” the court said.

“There was no auction conducted which was required under the PFC’s established procedure. All these acts together show the common criminal design of the two accused,” it added.

Meanwhile, Lozada Jr. was acquitted of the graft charge of violating Section 3(h) for having financial and pecuniary interest in the award of leasehold rights to a domestic firm Transforma Quinta (TQI), in which he has financial interest because he and his wife, Ma. Violeta, had been appointed to act for and in its behalf in certain financial transactions.

The court said the Board of Directors resolution, which granted the Lozada couple authority to transact with the corporation’s bank account and used as evidence to show that Lozada had a financial interest in the firm, failed to prove Lozada’s guilt beyond reasonable doubt.

“The prosecution was not able to establish the purpose of the Board Resolution of TQI. It was not able to relate it to the financial interest of accused Rodolfo Lozada,” the court said.

Lozada was the star witness in the National Broadband Network (NBN)-ZTE case, and testified in the graft trial of former First Gentleman Arroyo and Abalos who allegedly used their influence to lobby for the broadband deal with China. Former president Gloria Arroyo also faced graft and breach of ethical conduct in that case. The court is set to rule on the three accused’s motion to demurrer to dismiss the evidence of the case.

Lozada, who was involved in the project as technical adviser to then National Economic and Development Authority (Neda) Director General Romulo Neri, alleged that Abalos lobbied for the ZTE Corp. to get the contract in exchange for a $130 million commission for the project.

Lozada had also said the contract price for the project was signed by the government at $329 million, or $67 million more than the $262 million evaluation which Lozada himself had made as a technical adviser for Neri.

Arroyo later canceled the project after a scandal over its supposed overpricing and the alleged bribery of public officials erupted. The project would have interconnected government offices nationwide through broadband technology. IDL

Another cop gunned down in Cagayan de Oro