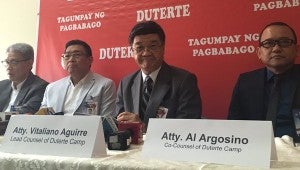 “We are securing witnesses to prosecute any person involved in illegal drugs,” Aguirre said in a text message when sought for updates regarding the recent pronouncements by President Rodrigo R. Duterte.

He said that “if they apply as state witnesses,” De Lima’s driver Ronnie P. Dayan as well as former Undersecretary Francisco F. Baraan III might qualify.

Last week, Duterte accused De Lima of coddling drug activities at the New Bilibid Prison during her stint as justice secretary under the Aquino administration.

He claimed De Lima was having an affair with her driver and using him as a conduit to collect money from drug lords imprisoned at the Bilibid in order to fund her senatorial campaign.

In response, De Lima described Duterte’s allegations as a diversionary tactic as she launched a Senate inquiry into the extrajudicial killings and police excesses in the campaign against illegal drugs on Monday.  SFM