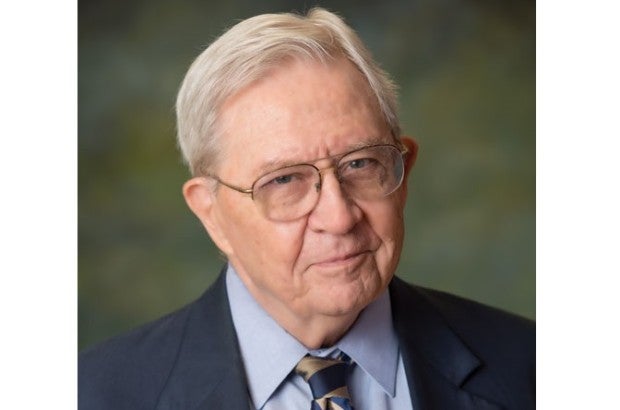 Donald Henderson, an American doctor and public health official who led the successful global drive to wipe out smallpox in the 1960s and ’70s, credited with saving tens of millions of lives, has died. He was 87. PHOTO FROM UNIVERSITY OF MARYLAND WEBSITE

WASHINGTON, United States — Donald Henderson, an American doctor and public health official who led the successful global drive to wipe out smallpox in the 1960s and ’70s, credited with saving tens of millions of lives, has died. He was 87.

Henderson “led the World Health Organization’s successful 10-year effort to eradicate smallpox, one of the greatest public health achievements in history,” Klag said in a statement announcing his death on Friday. “Smallpox is the only human disease ever to have been eradicated.”

Henderson died Friday in Baltimore of complications from a broken hip, the University of Pittsburgh Medical Center — where he was serving as a scholar — said in a statement.

An official at the Communicable Disease Center, which later became the Centers for Disease Control and Prevention, he was selected in 1966 to lead the then seemingly futile effort to eradicate smallpox.

First known as the “pox,” the disease was one of the deadliest in history, killing an estimated 300 million to 500 million people in the 20th century alone.

Caused by the variola major virus, smallpox inflicted great pain on victims, beginning with fever, nausea and other flu-like symptoms before leading to lesions on the face and body. A third of victims died. Survivors suffered disfigurement and occasionally blindness.

Heading an army of field workers around the world under an initiative of the World Health Organization, Henderson oversaw the implementation of a systematic vaccination program that focused on isolating outbreaks instead of attempting mass vaccinations.

Throughout the relentless effort, he often relied on his personal charm to urge leading officials to ensure their countries kept the drive going. The campaign was declared a success in 1980.

The son of an engineer and a nurse who grew up in Ohio, Henderson served as dean of Johns Hopkins University’s school of public health from 1977 to 1990 and later as a science and bioterrorism adviser in the administrations of Bill Clinton and both George Bushes.

His many international honors included the US National Medal of Science in 1986 and Presidential Medal of Freedom, America’s highest civilian honor, in 2002.

“He was an incredible raconteur who had, it seemed, a million stories about his life in public health,” Klag said, “ranging from the influenza epidemic of 1957 to running the WHO smallpox program to initiating and leading our nation’s preparedness and response efforts for bioterrorism.”

“D.A. Henderson truly changed the world for the better,” the University of Pittsburgh Medical Center’s Tom Inglesby said in a statement. “With all of that, he still took the time to be a mentor to countless young people, and was a great friend. He is truly irreplaceable.”

Henderson is survived by his wife Nana, daughter Leigh, and sons Douglas and David.