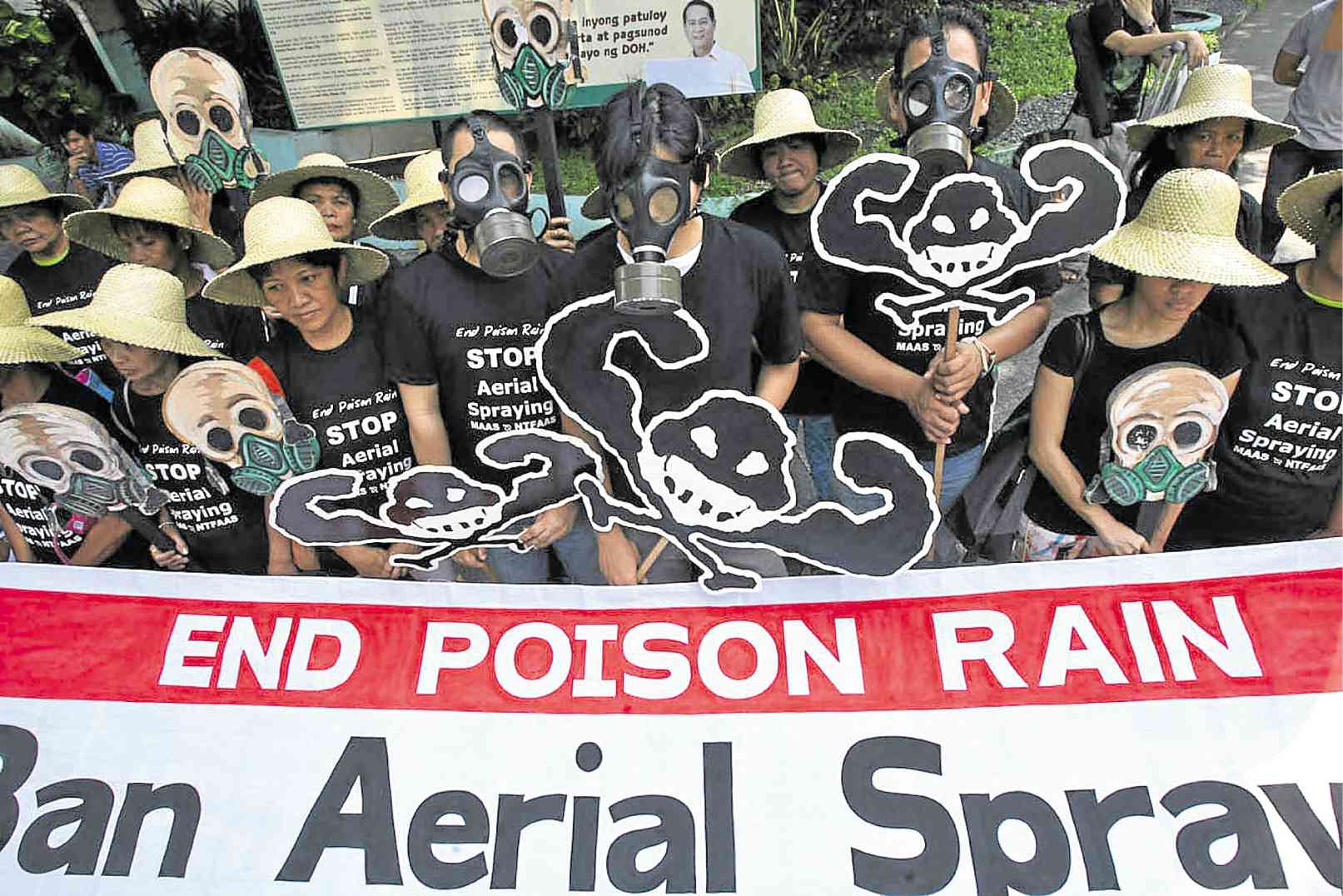 IN 2009, farmers and health and environmental activists from Mindanao staged a protest at the Department of Health office in Manila to urge its officials to protect them from chemical pollution caused by the aerial dispersal of pesticides. INQUIRER PHOTO

THE SUPREME Court has ruled as unconstitutional a Davao City ordinance banning aerial spraying as an agricultural practice.

In a unanimous en banc decision on Tuesday, the high court denied the city’s petition challenging the Court of Appeals’ ruling against the ordinance, which was approved by President Duterte when he was Davao mayor in 2007.

The high court, through Associate Justice Lucas Bersamin, found Ordinance No. 309-7 (An ordinance banning aerial spraying as an agricultural practice in all agricultural activities by all agricultural entities in Davao City) to have violated the Constitution’s equal protection clause.

This was because the ordinance made no substantial distinctions when it prohibited aerial spraying, regardless of the substance or the level of concentration of chemicals to be applied. The high court also noted that the ordinance imposed a 30-meter buffer zone in all agricultural landholdings regardless of size.

It said the city “must not act arbitrarily, whimsically or despotically regardless of the ordinance’s salutary purpose.”

The Inquirer, on Sunday, tried but failed to reach any Davao City official authorized to comment on the court’s decision.

The high court said the ordinance also violated due process rights of banana growers. It said they were deprived of efficient means to combat plant diseases, noting that three months were not enough to shift from aerial to trunk-mounted boom spraying.

Lastly, the SC said the Davao City government had no authority to regulate and control the use of pesticides and agricultural chemicals, because this is lodged with the Fertilizer and Pesticides Authority (FPA).

The high court said the ordinance was ultra vires (issued beyond legal authority), because it prohibits an activity already regulated through FPA’s regulations under Memorandum Circular No. 2, series of 2009.

The ordinance was challenged by the Pilipino Banana Growers and Exporters Association Inc. (PBGEA) after it took effect on March 23, 2007, a month after Mr. Duterte approved the rules.

Although banana growers initially won an injunction against the ordinance, the Davao City Regional Trial Court declared it valid and constitutional. The Court of Appeals, on Jan. 9, 2009, reversed the trial court’s decision and voided the ordinance for being unconstitutional.