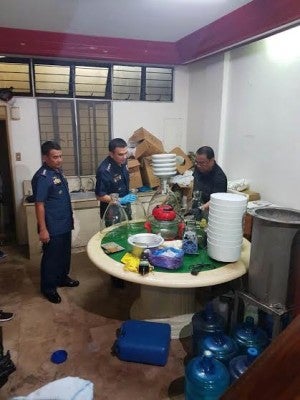 MANILA — An abandoned illegal drugs laboratory, which could produce 200 kilograms of shabu (methamphetamine hydrochloride) a week, was discovered in a townhouse in Barangay Apolonio Samson in Quezon City, during a joint operation of the Quezon City Police District (QCPD) and the Philippine Drug Enforcement Agency (PDEA) on Saturday.

The empty townhouse unit along Christian Street in Grace Village was raided by the authorities on Saturday afternoon after building owner Wilson Lee complained to the police that the Chinese tenant identified as Daniel Geng failed to pay his rent since April.

Lee told the police that his tenant started leasing the townhouse in December 2015 but was unable to pay for his rent beginning March 2016. The owner said he finally decided to have the unit opened on Saturday in the presence of his lawyers, barangay officials and the police.

It was during the inspection that PDEA agents and policemen from the QCPD La Loma Station recovered around 10 kilograms of suspected shabu and paraphernalia, apparatus and chemicals used to make the illegal drug.

The police said the estimated cost of the recovered substance could be around P35 million while the chemicals and other equipment found in the townhouse could cost around P20 million. The PDEA indicated that the shabu laboratory could also produce 200 kilograms of shabu per week.

PDEA operatives also indicated in a report that they have been surveying the place for the past months after they got reports that it was being used as a drug laboratory.

Senior Supt. Guillermo Lorenzo Eleazar, the QCPD chief, advised the public to be careful in renting out their properties and “for landlords and neighbors to immediately report suspicious activities.”  SFM