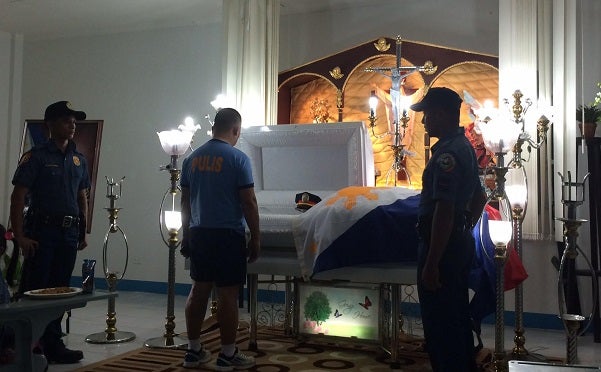 A fellow policeman pays his last respects to Senior Insp. Mark Gil Garcia, who was shot while arresting an alleged drug pusher in Antipolo City on Friday night. Garcia’s remains lie at the Multipurpose Hall of the PNP’s Rizal provincial office in the town of Taytay. JODEE AGONCILLO / PHILIPPINE DAILY INQUIRER

On his third antidrug mission for the day, a policeman credited with 65 recent arrests and described by his superior as the “best intelligence officer I have ever known” was shot dead by a “shabu” peddler in Antipolo City, officials said.

Senior Insp. Mark Gil Garcia, 37, chief of the special operations unit of the Rizal provincial police, was with a team that conducted a buy-bust operation shortly before 8 p.m. on Friday in Sitio Maagay 1, Barangay Inarawan.

After Malana handed over P300 worth of shabu, he sensed the trap and ran back to his house, prompting Garcia to follow him. Malana’s partner was shot dead. As Garcia entered Malana’s house, the suspect shot the officer with an improvised shotgun, hitting him in the upper left thigh.

Malana was also killed by the other officers while Garcia died two hours later at Antipolo District Hospital due to blood loss, Gran said.

The Antipolo mission was Garcia’s third on Friday, according to the provincial police chief, Senior Supt. Adriano Enong Jr. 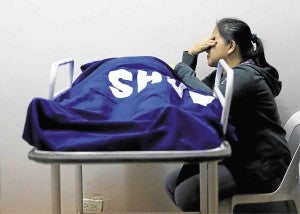 Judy, the wife of Senior Insp. Mark Gil Garcia, sits by the body of the slain police officer. She recalls pleading with Garcia to ‘take a break’ from police work but the official told her that he still needed to do something important. It was their last conversation.

“He was one of my most hardworking, efficient and brightest policemen. He worked nonstop,” Enong said in an Inquirer interview at Garcia’s wake in Dolores, Taytay.

“He is the best intelligence officer I have ever known. He was not expected to be in the operations—he only had to supervise them—but he was there. He was a good leader,” Enong said, adding that posthumous honors will be given to the slain officer.

Garcia led operations that resulted in the arrest of 65 drug suspects in Rizal since June. “That’s practically one arrest per day,” Enong noted. 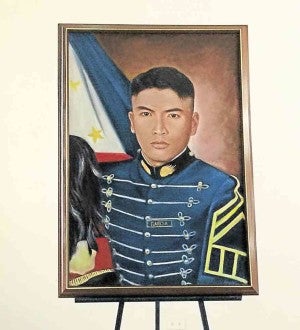 Senior Insp. Mark Gil Garcia of the Rizal police was described as a “nonstop worker” by his commander, while his widow, Judy, recalled asking him to take a break in a conversation that proved to be their last. JODEE AGONCILLO

A 2004 graduate from the Philippine National Police Academy, Garcia previously served as an aide of then Interior Secretary Ronaldo Puno. He also was a former police chief of Jala Jala, Rizal.

His widow, Judy, recalled pleading with her husband to “take a break” from police work in their last conversation. “But he told me ‘not yet’ since he still had an important thing to do.”

The couple have three young children, the youngest a 2-month-old son. “I don’t know what will happen to us now. I hope they will provide my children with scholarships considering what (their father) had given to the country and to his profession.”

President Duterte, who has already sent flowers for the dead, was reportedly scheduled to visit the wake.