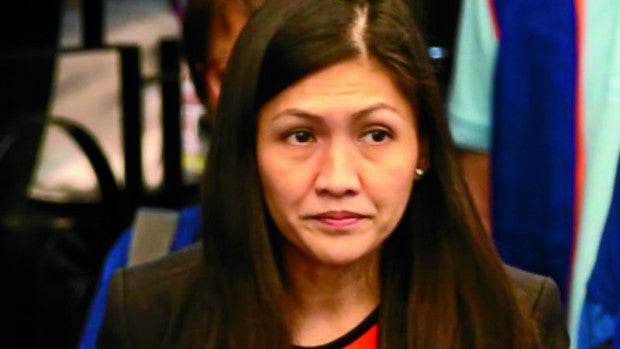 Maia Deguito was released from Makati police detention at 1:15 a.m. following an order from Pasay Metropolitan Trial Court Judge Remibiel Mondia to release her at 11 p.m.

Her lawyer, Ferdinand Topacio, told reporters Wednesday night that the delay was caused by the need to secure copies of the information and the fiscal’s resolution.

Deguito was arrested by Makati police at 4:45 p.m. Wednesday at Power Plant mall in Rockwell on a perjury complaint.

Topacio said he was surprised Deguito was arrested “in connection with a case we had never heard about until tonight, the investigation of which we had never been notified.”

“We will explore all legal avenues to make all those responsible for this travesty of justice accountable by filing criminal and administrative charges in the Pasay City prosecution office, if warranted, that [Deguito’s] constitutional rights were violated,” Topacio said.

They will also file a case in the Commission on Human Rights, he said.

“This is pure harassment. Her rights were violated,” he added.

Deguito was fired by RCBC after the branch she headed―located on Jupiter Street in Makati―processed the withdrawals of a total of $81 million stolen via electronic transfer from the account of the Bangladesh central bank in the Federal Reserve Bank of New York in February.

Deguito allegedly helped arrange the deposit and withdrawal of the money but claimed she was only following orders from her superiors and denied wrongdoing.

She said a Manila-based Chinese casino junket operator had told her to open the accounts. The stolen funds were deposited in four of the accounts and ended up in casinos which are not covered by the anti-money laundering law.

Only about $18 million has been recovered.

Former RCBC president Lorenzo Tan filed a P32-million libel suit against Deguito for “scurrilous remarks” that dragged him into the case.

In April, Tan filed a civil complaint against Deguito alleging abuse of rights and defamation after she told a congressional hearing that Tan was aware of the opening of the five questionable accounts at her branch.

According to the Pasay MTC Branch 46, the main complainant of the perjury case against Deguito is former RCBC president and CEO Lorenzo Tan. Tan resigned in May after Deguito said he asked her “to take care” of casino junket operator Kim Wong, whose Chinese client brought in the funds which were stolen from the Bangladesh central bank.