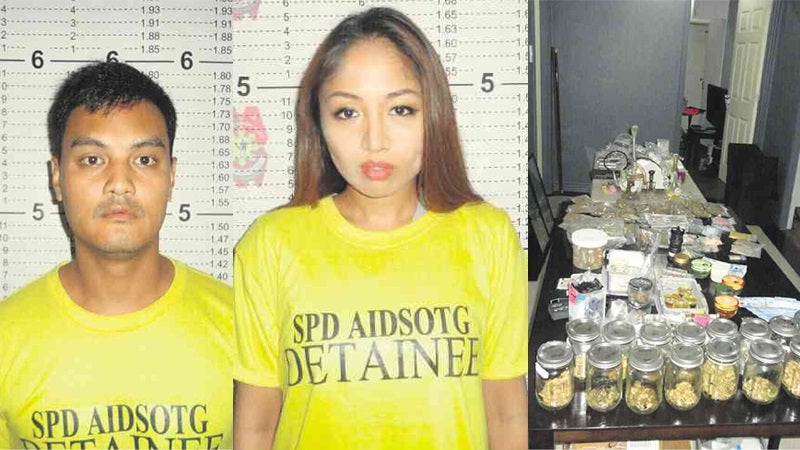 DRUG suspects Emilio Lim and Karen Bordador have their mug shots taken at the Southern Police District following the Aug. 13 operation that caught them allegedly keeping a stash of ecstacy pills and marijuana at a Pasig City condo unit. SPD PHOTOS

FM radio DJ Karen Bordador gave a urine sample for her drug test but refused to sign the police request form indicating her consent, the case investigator told the Inquirer on Tuesday.

Bordador and her boyfriend Emilio Lim, allegedly a supplier of party drugs to upscale clubs, were arrested during a buy-bust operation at a condo unit in Pasig City on Saturday afternoon.

Bordador said she was just visiting her boyfriend at the time of the raid. However, the arresting officers said she was the one who took from a suitcase the ecstasy pills which she gave to Lim who was transacting with the undercover policeman.

As of Tuesday, the two remain detained at the Southern Police District (SPD) headquarters in Taguig City. The SPD, in coordination with the Eastern Police District, led the operation against Lim based on the information given by another drug suspect arrested earlier in Bonifacio Global City.

A complaint for drug possession, trafficking and conspiracy was filed against the two on Monday in the Pasig City prosecutor’s office. Bordador and Lim, through their counsels, sought a preliminary investigation.

SPO2 Rafael Castillo, case investigator from the SPD antinarcotics unit, said it would be up to the court to determine the legal implication of Bordador’s refusal to sign the consent form. Lim had signed the form, he added. Drug testing is mandatory for those arrested in drug-related violations.

Initial results indicated that the two were positive for drug use, according to SPD operatives. The couple also tried to resist arrest by attempting to close the condo unit’s door when the buyer identified himself as a policeman.

Chief Supt. Oscar Albayalde, acting director of the National Capital Region Police Office, lauded the SPD and said the arrest was part of efforts to destroy the party drugs trade in high-end bars in Metro Manila.