Comelec accused of failing to preserve documents in Marcos protest 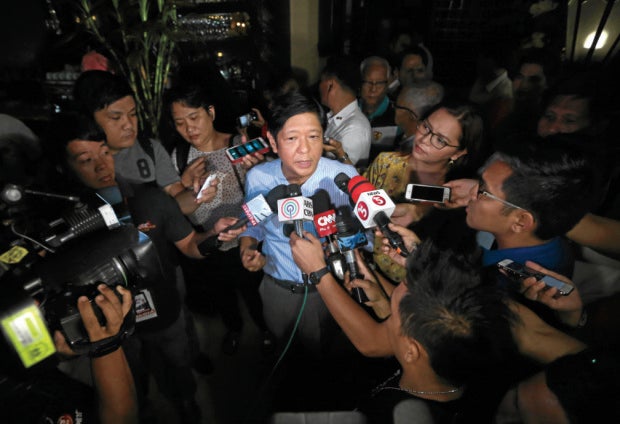 In a seven-page manifestation, Marcos through his lawyer George Erwin Garcia said on the same day that the high court issued the PPO on July 12, the Comelec en banc issued a resolution approving the recommendation of Commissioner Christian Robert Lim to conduct a stripping activity of the vote counting machines (VCMs) and consolidated canvassing system (CCS) laptop units used during the last May 9 elections.

Marcos said the timing of the Comelec resolution is highly suspect.

“Since the Comelec resolution stated that the stripping of the VCM and CCS laptop units ‘would be conducted  starting July 16, 2016, it appears that ‘backdoor plans’ were already being made to erase the evidence needed for the election protest to prosper,” the manifestation read.

“Thus, if Comelec already made plans to erase the election data four days after the public announcement of the PPO—could it be that the Comelec was trying to fast track the stripping of election data before the PPO could officially be served on them?” it noted.

Marcos feared the possibility that all election data will be tampered with considering that the Comelec resolution itself admitted that audit logs during election will be modified with the backing up of files from the CCS laptops.

He also questioned why the stripping activity is only limited to its warehouse in Sta. Rosa, Laguna when there are six other warehouses where several VCMs and CCS laptop units were stored during the May elections.

“Verily, the issuance of the resolution approving the backing up of the SD cards and CCS units and the subsequent stripping of the VCMs and CCS laptop units is a blatant violation of the express and clear directive of this Honorable Tribunal as contained in the PPO, which categorically ordered Comelec to preserve and safeguard the integrity of all the ballot boxes and their contents, voter registration records, audit and transmission logs, automated election equipment, and other documents and paraphernalia used in all the 92,509 clustered precincts nationwide,” the manifestation stated. ”

Earlier, Comelec said stripping of VCMs and CCS is necessary to return the leased machines to Smartmatic. RAM

Read Next
Guard shoots, kills parents of woman he woos, then kills self
EDITORS' PICK
97 areas in PH under Alert Level 4 — DOH
COVID-19 cases may peak by October — DOH
Declaration of Pacquiao as PDP-Laban presidential bet illegal — Cusi wing
An innovative, fun shopping experience AllDay
Welcome the next imagery master with vivo X70 co-engineered with Zeiss
Watch live performances by ITZY, Mamamoo and other K-pop stars on Smart’s GigaPlay App
MOST READ
Son of prominent businessman nabbed in La Union for cocaine possession
Roque not surprised by opposition to ILC nomination: They do not wish anyone to succeed
Drilon wants income tax records of Pharmally execs with luxury cars
Declaration of Pacquiao as PDP-Laban presidential bet illegal — Cusi wing
Don't miss out on the latest news and information.