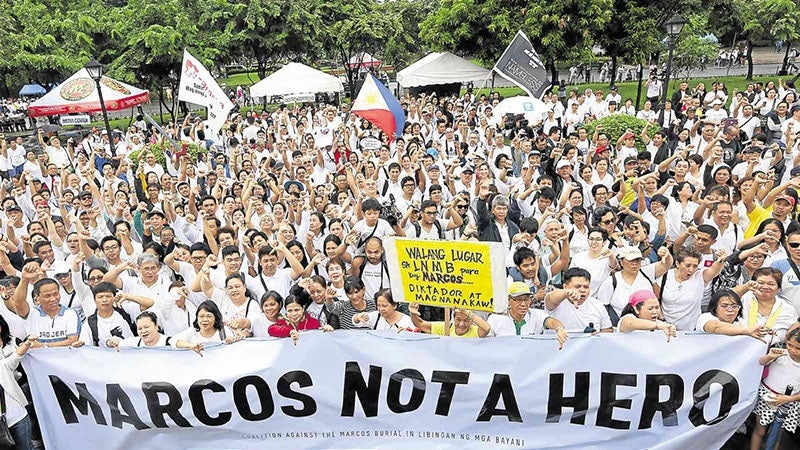 KEEP HIM IN BATAC Hundreds of people gather at the Lapu-Lapu monument in Rizal Park, Manila, on Sunday to protest the burial of President Ferdinand Marcos at Libingan ng mga Bayani. President Duterte is determined to allow a state burial for the late dictator. MARIANNE BERMUDEZ

WHERE the nation built monuments to its heroes, hundreds of Filipinos gathered in stormy weather on Sunday to protest President Duterte’s plan to honor the late dictator Ferdinand Marcos with a state burial.

More than a thousand survivors of martial law, human rights activists, legislators, artists, clergy, students and ordinary citizens held a three-hour program at the foot of the Lapu-Lapu monument at Rizal Park in Manila and urged

Mr. Duterte to reconsider his plan to move Marcos’ remains from his hometown in Ilocos Norte province to Libingan ng mga Bayani in Taguig City next month.

“We would be the laughingstock of the entire planet,” said Sen. Risa Hontiveros, one of the legislators who took part in the “citizens’ assembly.”

She called Marcos an “unrepentant enemy of our heroes.”

Marcos’ family has kept his preserved body on display in a mausoleum in Batac, his hometown in Ilocos Norte, after his death in exile in Hawaii in 1989, demanding that it be buried with full honors at Libingan ng mga Bayani despite a 1992 agreement with the government that bars his burial at the heroes’ cemetery.

Marcos, who was elected President in 1965, declared martial law in 1972, allowing him to rule as a dictator while he, his family and allies enriched themselves through massive corruption and his troops brutally stamped out dissent.

He was toppled from power in the Edsa People Power Revolution in February 1986 and was succeeded in office by President Corazon Aquino, who refused to allow the return of his body to the Philippines.

The succeeding administration of President Fidel V. Ramos, however, allowed the body’s return after the Marcos family agreed in 1992 to fly it straight to Ilocos Norte where it would be buried with honors befitting a major in the military, not to parade it in Metro Manila, and never to transfer it to Libingan ng mga Bayani.

That agreement had been unknown to the public until last week, when opponents of Mr. Duterte’s plan disclosed it and Ramos, through his adviser Rafael Alunan, one of the signatories to the deal, confirmed its existence and said it remained binding.

The administrations of Presidents Joseph Estrada, Gloria Macapagal-Arroyo and Benigno Aquino III had refused to allow the transfer of Marcos’ remains to Libingan.

But Mr. Duterte, a friend of the Marcos family, decided to allow the transfer, saying Marcos deserved to be honored as a soldier and President, regardless of his misdeeds.

Survivors of martial law atrocities denounced the plan as a travesty and betrayal of history.

“Burying Marcos at Libingan ng mga Bayani would be rewarding deceit, greed and crimes against humanity. Its message would be that dictatorship is OK. It would give the wrong signal to the young,” former Akbayan Rep. Walden Bello said  during the protest  at Rizal Park on Sunday.

“Instead of healing the country, it would perpetuate dissension and division. It would subject the country to international ridicule, [as] it would be seen as an act akin to burying Al Capone at Arlington Cemetery,” he added.

“Heroes do not steal, do not kill. They are not shameless and do not betray the country,” he said in Filipino. “Heroes are those who die fighting for democracy without demanding recognition, those who die in the mountains, the minorities who die to defend our freedom.”

“Let’s stop this plan. Let’s all wake up,” he added, noting that the Marcos family had managed to keep “fooling” the nation, with the dictator’s son and namesake, ex-Sen. Ferdinand Marcos Jr., nearly winning the vice presidential race in May’s national elections.

Lamangan said the dictator should be buried at  “Libingan ng mga Taksil sa Bayan,” not at a graveyard for heroes.

Albay Rep. Edcel Lagman, among the legislators opposed to Marcos’ burial at Libingan, vowed to fight Mr. Duterte’s plan all the way to the Supreme Court.

“Through rain or storm, we will continue mass actions, not just in Metro Manila but [throughout] the country so that Marcos’ burial [at Libingan ng mga Bayani] will not push through,” said Lagman, whose brother Hermon, a human rights lawyer, was killed during martial law and whose body was never found.

“We will do that with a petition [to] the Supreme Court to throw out the plan. [The rules say] only deserving soldiers and Presidents should be buried at Libingan—those who gave the people inspiration and [served as models for them to emulate],” Lagman said.

A group of martial law detainees said during the weekend  it would challenge Mr. Duterte’s decision in the Supreme Court this week.

Memory of a monster

Sen. Leila de Lima, a former chief of the Commission on Human Rights (CHR), said burying Marcos at Libingan would be tantamount to “erasing the memory of the monster that was the Marcos regime.”

“This burial is not for Marcos. This is our burial. We will be the ones buried, along with the history of our fight against dictators and butchers. We will be buried under the ground, just like how the dictatorship buried thousands of victims of martial law,” De Lima said.

She said allowing the burial of Marcos at Libingan would be like “killing the remaining strength of the Filipino to stand up against the return of dictatorship.”

Former Sen. Wigberto Tañada said Marcos was “not a hero.”

“What are we still debating here? This is an insult,” he said.

Former CHR Chair Loretta Ann Rosales, who was imprisoned and tortured during martial law, called Marcos a “thief, criminal and traitor,”  and said he should not be buried in hallowed ground.

“We will not allow that. We will not let the youth be blinded from the truth,” she said.

Protests against Mr. Duterte’s plan were also held in other parts of the country, including his hometown,  Davao City.

Keep it in Batac

Chanting “Galing sa Batac, ibalik sa Batac,” a reference to Marcos’ hometown in Ilocos Norte, survivors of martial law gathered in front of San Pedro Church in Davao City, urging Mr. Duterte in an open letter to drop his plan and instead ensure that the dictator’s remains stay in Batac, where he is loved and honored by the Ilocanos.

Teody Navea, coordinator for the group Sanlakas, said the protest was just the start of a series of activities planned to fight the President’s decision to allow the burial of Marcos at Libingan. With reports from Germelina Lacorte, Inquirer Mindanao; Michelle Padayhag, Inquirer Visayas; and AFP