Tourism puts Bicol ahead among regions 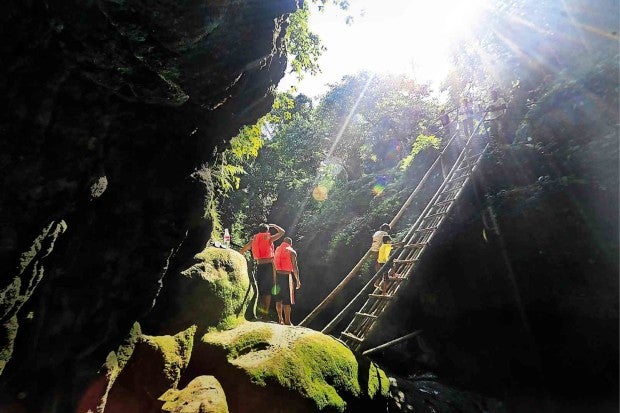 THE QUITINDAY underground river and falls in Jovellar town in Albay are among the hidden gems of the province that have been steadily attracting tourists in the last few years. MARK ALVIC ESPLANA/INQUIRER SOUTHERN LUZON

LEGAZPI CITY—Tourism thrust Bicol into its peak economic performance in 2015, registering the highest growth rate among regions in the country, according to the Philippine Statistics Authority (PSA).

Bicol’s economy grew by at least 8.4 percent, higher than the national economic growth rate of about 6.3 percent.

“Tourism will continue to be the major growth driver of the region’s economy,” said Cynthia Perdiz, PSA regional director. It creates sustainable jobs, she said.

Take the case of Jovellar town in Albay province.

Eddie Pedrajeta, barangay chair of Quitinday, said tourism brought his village to life after the Quitinday falls and its underground river attracted thousands of tourists. More than 50 families earned extra income from tourist arrivals, he said.

The places started to be noticed in 2012, but tourist traffic increased only in 2015, local officials said.

“Tourism gives us a big opportunity. I don’t have to leave my family to look for another job,” said Analiza Broqueza, 39.

Broqueza stopped working as a housemaid in Batangas province to return to Quitinday. She now sells “halo-halo,” pili candies and food to tourists.

The National Economic and Development Authority in Bicol said the region’s growth rate last year was almost double its growth rate in 2014 of 4.3 percent and exceeded the regional target of 6.7 percent.

The PSA attributed the growth to the focus on tourism by agencies and programs working in harmony. Aggressive promotion and marketing of the region as a tourist destination helped, it said.

Perdiz said Bicol’s showing was also driven by the growth of other businesses (manufacturing, construction, mining, etc.), from just 5.3 percent in 2014 to 23.7 percent in 2015.

Dr. Ricardo Beljica, an economist and professor at Bicol University in Albay, said the vibrant tourism industry drove the rise of malls, hotels and tourism-oriented enterprises.

“There is a high propensity to consume on the part of Bicolanos,” Beljica said. “Massive government projects helped a lot.”