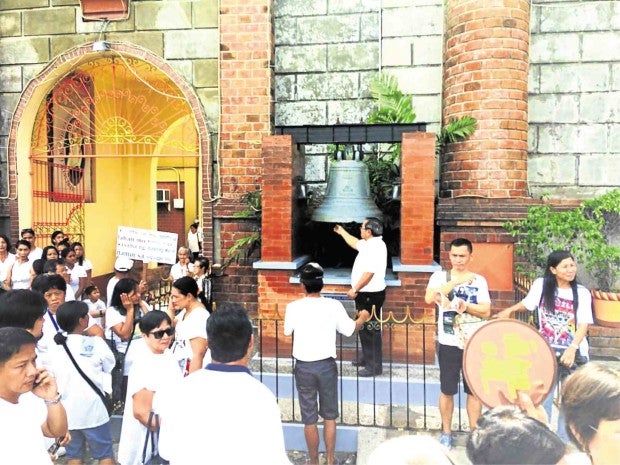 BAUANG residents gather near the historic San Pedro Bell in support of their mayor, who was on a list of drug personalities announced by President Duterte. YOLANDA SOTELO/INQUIRER NORTHERN LUZON

THE IMPACT of the shame campaign component of President Duterte’s war on drugs is drawing different reactions from the people whose names were read aloud by Mr. Duterte from his list of individuals with allegedly key roles in an underworld network of drug syndicates that has grown into the monster that the President vowed to reduce to a bloody pulp.

In Bauang, La Union province, supporters of Mayor Martin de Guzman, among those on Mr. Duterte’s list, turned to a historic bell to express disbelief over the report of their leader’s involvement in drugs.

The San Pedro Bell was rung on Thursday at a rally in support of De Guzman. The 400-year-old bell has recently been returned to Bauang by the United States.

At least 2,000 residents came out in white clothes for a unity walk for the mayor.

A placard carried during the walk read: “We strongly believe you are innocent,” referring to De Guzman.

Menchie, De Guzman’s wife, joined the walk. She said she was in the United Kingdom with her daughter when Mr. Duterte announced the names on his drug list.

“I did not know what to say, how to react,” said Menchie.

“I wanted to believe it was a nightmare [and] I could wake up,” she said.

Erlinda Espinas, a member of the village council of Parungao in Bauang, said in her 18 years in the council, she had not heard of any report or rumor linking De Guzman to drugs.

In Surigao del Norte, the former mayor of Alegria town said the only kind of drugs that she handles are the ones that heal the sick.

Jessie Aguilera, a doctor by profession, said while she had already ended her venture into politics as mayor of Alegria in 2007, Mr. Duterte’s list still identified her as a sitting mayor.

“I have no idea why on earth my name was dragged into this whole mess,” Aguilera told reporters after visiting the Caraga regional police office in Butuan City on Monday.

Aguilera, now the municipal health officer of Mainit town also in Surigao del Norte, said she went to the regional police office “because this is very terrifying for me.”

In Davao City, a village chair, who is also on Mr. Duterte’s list, showed up at the city police office and requested to be tested for drugs.

Artemio Jimenez, of Barangay Talomo, said he had been at the forefront of the war on drugs in Davao City in his village of 180,000 people.

In Cotabato City, a plea for understanding for Mr. Duterte came from an unexpected source—Gov. Mujiv Hataman, of the Autonomous Region in Muslim Mindanao, who supported the candidacy of one of Mr. Duterte’s rivals in the presidential race, former Interior Secretary Mar Roxas. Yolanda Sotelo, Inquirer Northern Luzon with Danilo V. Adorador, Allan Nawal and Charlie Señase, Inquirer Mindanao