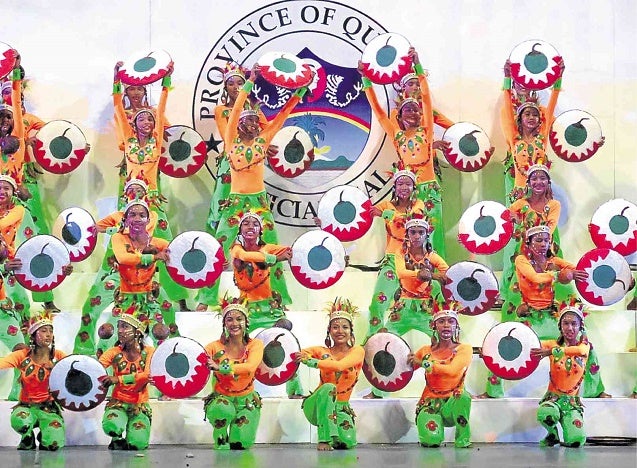 PERFORMERS take the stage during the 2015 holding of the Niyogyugan Festival, a feast in honor of the coconut industry in Quezon province. DELFIN T. MALLARI JR./INQUIRER SOUTHERN LUZON

LUCENA CITY—A national farmers’ group urged organizers of the weeklong Niyogyugan Festival (Coconut Festival) in Quezon province to use the occasion to help advance calls for the return of the coconut levy fund forcibly collected from farmers and planters by the Marcos dictatorship.

Jansept Geronimo, spokesperson of Kilusan Para sa Tunay na Repormang Agraryo at Katarungang Panlipunan, said the festival would be “more worthy if organizers would also use it to advance the cause of farmers.”

Coined from the word “niyog” (coconut) and “yugyog” (move to a fast beat), Niyogyugan showcases the province’s top products and rich cultural traditions through a float parade, street dance competitions and other events.

The festival, to last Aug. 15-27, is the provincial government’s way of recognizing the role of the coconut industry in the cultural and historical development of Quezon.

Geronimo appealed to the provincial government to take advantage of the event and use it to inform farmers and the people about the coconut levy issue.

He suggested the creation of a booth for the distribution of flyers and holding of a forum to update coconut farmers on the status of the levy under the Duterte administration.

The provincial board invited coconut farmers’ groups to a public hearing on Tuesday and discussed the levy issue.

“But the participants are limited to only few farmers’ groups,” said Geronimo. He said it was “noticeable” that most farmers “are not abreast” about the levy issue.

Roberto Gajo, head of the provincial agriculture office, said the levy issue would be brought up during the Farmers’ Day program of the festival to be attended by Agriculture Secretary Emmanuel Piñol.

Gajo said the provincial government supported the farmers’ call for the return of the levy.

His office, he said, has prepared a road map for the rehabilitation of the coconut industry in Quezon.

Coconut farmers from Quezon are believed to be the biggest contributors to the levy, which was collected by the Marcos dictatorship between 1973 and 1982.

Immediately after his election, President Duterte directed his legal team to initiate moves to ensure that assets allegedly acquired illegally using the levy, now worth more than P100 billion, are released to the country’s coconut farmers.

Geronimo urged farmers not to be complacent, though.

“History tells us that we should not let our guard down. We should just continue the struggle until the full release of the fund [happens],” he said.

Geronimo appealed to the President to speed up the release of the levy and the creation of the proposed Coconut Farmers Trust Fund (CFTF).

The bill creating the CFTF, which was refiled by Sen. Francis Pangilinan, proposes an accounting and inventory of the levy assets and their conversion into a perpetual trust fund for use in developing the coconut industry.

The creation of the CFTF “is the first step in the right direction,” Geronimo said.

The fund is expected to benefit more than 20 million coconut farmers and their families from some 21,000 coconut-producing villages across the country. Delfin T. Mallari Jr., Inquirer Southern Luzon