Duterte to Sereno: I’m just trying to stop drugs within my powers 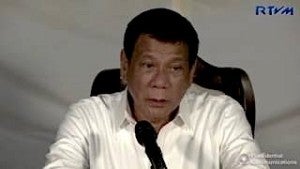 DAVAO CITY — President Duterte has apologized to Supreme Court Justice Maria Lourdes Sereno for the harsh words that he had said about her response to his public linking of several judges to the drug trade.

He said his public list of elected officials, policemen and judges suspected of links to the drug trade was only his way of solving the drug problem within the ambit of his power as President.

“I apologize to the Chief Justice for the harsh words I’ve said,” Mr. Duterte said.

“It was my way of solving the problem within the ambit of my power as president.”

President Duterte also said he did not want a repeat of the tangle he had with the Chief Justice and even blamed the media for asking for the list of suspected drug protectors which as president, he said, he had a duty to reveal.

“Humihingi kasi kayo (You asked for it),” Duterte told reporters, “Every time you’re there, you keep demanding where is the list involving judges, so, as president, I don’t have to go into the motion of waiting for the warrant of arrest, may FOI tayo (we have Freedom of Information),” he said, referring to the executive order on the Freedom of Information which he signed earlier.

“My job is to inform the people about their surroundings and the threat that illegal drugs might bring into their lives,” he said.  SFM