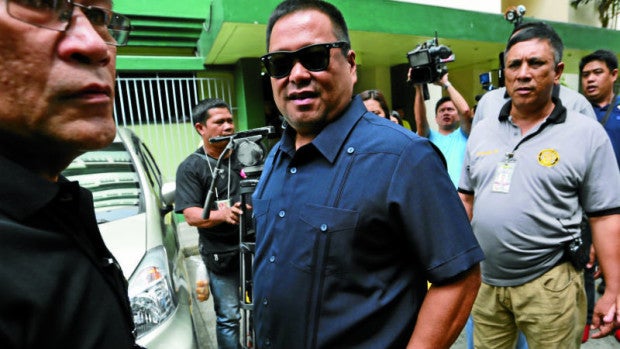 State prosecutors on Thursday reiterated their bid to place Sen. Joseph Victor “JV” Ejercito under preventive suspension pending trial in his graft case for using San Juan’s calamity funds to purchase 20 submachine guns when he was city mayor in 2008.

In its reply to Ejercito’s camp filed before the Sandiganbayan’s Sixth Division, prosecutors maintained that a preventive suspension order was mandatory under Republic Act No. 3019 or the Anti-Graft and Corrupt Practices Act.

“Republic Act No. 3019 does not exclude from its coverage the members of Congress and that, therefore, the Sandiganbayan did not err in thus decreeing the assailed preventive suspension order… Section 13 unequivocally mandates the suspension of public officials from office pending a criminal prosecution under RA 3019 or Title 7, Book II of the Revised Penal Code or for any offense involving public funds or property or fraud on government. This Court has repeatedly held that such preventive suspension is mandatory, and there are no ‘ifs’ and ‘buts’ about it,” the prosecution said.

Ejercito’s camp and his co-accused incumbent San Juan officials earlier argued that there was no need for preventive suspension as they were “not a threat to the unimpeded resolution of the case.”

Suspension and loss of benefits under Section 13 of RA No. 3019 reads: “Any public officer against whom any criminal prosecution under a valid information under this Act or under the provisions of the Revised Penal Code on bribery is pending in court, shall be suspended from office.”

The prosecutors defended the Sandiganbayan against accusations from Ejercito’s camp, saying that the court only adhered to the clear command of the law and mass of jurisprudence, “sustaining its authority to decree suspension of public officials and employees indicted before it.”

“Petitioners would now have this Court strike down these resolutions because supposedly rendered in excess of jurisdiction or with grave abuse of discretion. The Court will not do so. In no sense may the challenged resolutions be stigmatized as so clearly capricious, whimsical, oppressive, egregiously erroneous or wanting in logic as to call for invalidation by the extraordinary writ of certiorari,” they said.

“The fact is that the possibility that the accused would intimidate witnesses or otherwise hamper this prosecution is just one of the grounds for preventive suspension,” the prosecutors added.

Ejercito earlier vowed to counter the prosecution’s bid to suspend him, saying that the 2008 procurement of high-end firearms was aboveboard. He was accused of conspiring with other local officials to use the city’s calamity funds to buy the firearms in February 2008.