Pangasinan police will pay for tips on drug suspects 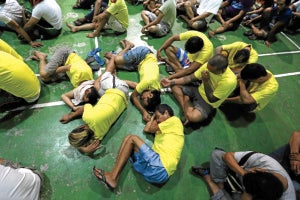 Detainees sleep on the floor as they await processing during the operations targeting drug personalities, persons with warrant of arrest and violators of city ordinances of the PNP Eastern Police District covering the area of Pasig, Marikina, Mandaluyong and San Juan City at the EPD Headquarters in Pasig. One hundred ninety eight (198) people were arrested during the operations.INQUIRER PHOTO/RAFFY LERMA

DAGUPAN CITY, Pangasinan — The Pangasinan police office has put up a P5,000-reward for information that would lead to the arrest of any drug pusher operating in the province.

“We know that there are still many [drug pushers] out there who have not surrendered,” said Supt. Jackie Candelario, deputy provincial police director, in a Thursday news conference.

As of Sunday (Aug. 7), 895 out of the 11,206 individuals, who have surrendered, were confirmed to be drug traffickers, while the rest were their addicted clients.

A police informant can send a text message to telephone nos. 0927 381 4992, on the name of a suspected drug pusher or the location of a drug den, the informant’s location and the manner by which the illegal drugs have been sold, Candelario said.

The tip would be validated, and a police operation would be launched, after which the informant would be asked by text to claim the reward.

“We will ensure the security and confidentiality of the informer’s identity,” said Candelario.

Shabu (methamphethamine hydrochloride) has become a rare commodity in the province, and has become expensive, he claimed.

Since July 1, a total of 292 drug suspects have been arrested. The police also confiscated 260.99 grams of shabu and 27.112 kilograms of marijuana.

But 21 drug suspects were killed by policemen undertaking buy-bust operations, while 36 others were killed by unidentified gunmen. Eleven people were found dead in the different towns of the province.
Candelario said the police were still investigating all these killings, as of Thursday.

In Nueva Ecija, a top police official said the Central Luzon police have been validating information that 10 mayors and vice mayors were tied to illegal drugs.

Aquino said a hundred policemen have been placed under investigation for drug links.  SFM/rga