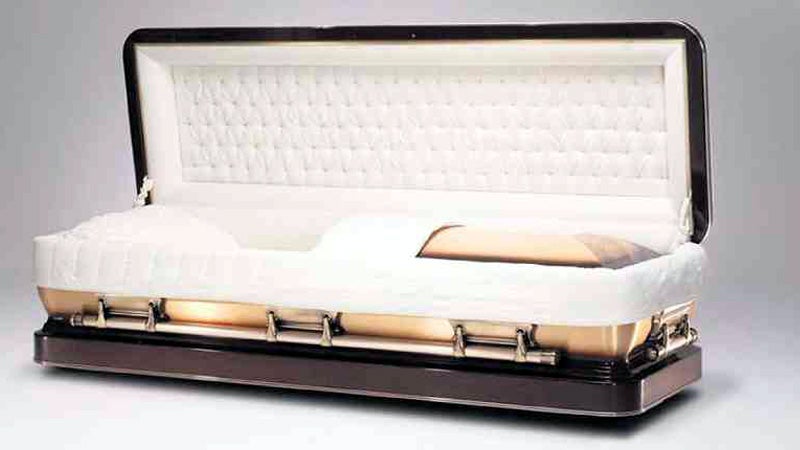 TWENTY-SEVEN years after his death in Hawaii, the late dictator Ferdinand E. Marcos would finally be interred, if things don’t miscarry, in a place his family had been wishing for―in a manner that is quite typical of his deposed regime.

The casket that would bear his preserved remains is made of bronze, purchased through the Philippine distributor of Aurora Caskets of Indiana in the United States, sources told the Inquirer.

His remains have been lying in a glass-encased coffin (some claim he’s actually buried under it) at the Marcos Museum and Mausoleum in Batac City, Ilocos Norte.

More money is being poured by the Marcos family for food, logistics and other expense items for a grand program of activities that is scheduled to start on Sept. 15-17 in Ilocos Norte and culminate in the burial on Sept. 18 at Libingan ng mga Bayani in Taguig City.

The cemetery is reserved for Medal of Valor awardees, Presidents and other government officials, martyrs, artists and other citizens for “the inspiration and emulation of this generation and of generations still unborn.”

The new bronze casket bearing the remains of Marcos may be opened for viewing at the family ancestral house in Batac this week, before the scheduled burial at Libingan.

But officials of the Ilocos Norte government said this would depend on security measures they would implement to control waves of Marcos loyalists who are expected to come to bid farewell to the former President.

Publicity surrounding the burial has drawn many tourists to the ancestral house where Marcos’ frozen body has been kept at the family mausoleum since September 1993.

The house has been converted into a museum, so its caretakers have cordoned off the mausoleum.

The Marcos family has stopped the release of new information on the burial preparations, in light of the security concerns.

The municipal health office is discussing how best to facilitate the transfer of the body to Manila. Dr. Alicia Agbayani, city health officer, said her office was finalizing the release of clearances that would allow the body to be transferred to Manila.

Frank Malabed, a mortician, has been maintaining the Marcos body since his death on Sept. 28, 1989, in Honolulu, Hawaii, where the family fled following the 1986 Edsa People Power Revolution.

On Tuesday, Malabed inspected Sta. Monica Parish Church in Sarrat town where the body would be taken after the commemoration of Marcos’ 99th birthday on Sept. 11.

The body will be taken to St. Augustine Church in Paoay town before it is flown to Libingan on Sept. 17.

Iglesia Filipina Independiente (IFI), which runs the Bishop Gregorio Aglipay Shrine across from the Marcos house in Batac, is also offering prayers for Marcos.

Marcos, then 3 months old, was baptized by the IFI cofounder, Gregorio Aglipay. He was rebaptized as a Roman Catholic when he married Imelda Romualdez in 1954.

The burial of Marcos was not permitted under the administrations of Presidents Corazon Aquino, Fidel Ramos, Joseph Estrada, Gloria Macapagal-Arroyo and Benigno Aquino III, either due to strong personal conviction or adverse public opinion, until President Duterte decided to honor his campaign promise that he would allow it on the grounds that “Marcos may not be a hero, but he was a soldier and former President.”

Mr. Duterte’s decision was based on his own belief that the issue “has long divided Filipinos” and that it was now time to move on and have “closure.”

But, instead, his statements have met strong opposition from various sectors. One form of protest was putting rocks with the names of the victims of the Marcos regime.

The act also marked the launch of #bawatbato (each stone), a movement that Susan Quimpo, member of the Martial Law Chronicles Project, said “encourages others to do the same in different sites significant in the struggle against the dictatorship. These may include schools where many students were detained or killed.”

In preparation for the burial of Marcos, workers have removed the rocks and started digging a grave in the Presidents’ section of Libingan.

The Army spokesperson, Col. Benjamin Hao, said the sprucing up of the long idle open crypt started on Friday.

Security was tightened as the planned burial of the late dictator was expected to spur protests.

“The commander on the ground wants to maintain peace, solemnity and tranquility of the place. That will be disrupted if there will be rallies inside,” Hao told the Inquirer on Tuesday.

The Army’s Grave Service Unit has also fenced off the burial plot.

This will prevent protesters from putting stones or rocks, Hao said. The stones of protest have since been removed.

He said the Philippine Veterans Affairs Office (PVAO) was the administrator of Libingan as it was the agency in charge of all national shrines with military and historical significance.

Maintenance was devolved to Army units stationed near a historical site.

“We just follow orders. On Friday, a civilian engineering company arrived. They said they have coordinated with the PVAO and they want to start the repair of the space. So, they were allowed to,” Hao said.

Selda, an organization of former political detainees, on Tuesday called on Mr. Duterte to reconsider his decision to allow the burial at Libingan.

“Despot Marcos, a murderer and a plunderer, is not a hero, and it is the height of historical revisionism to give him full national honors as a hero,” the group said in a statement.

“The move, if pursued, constitutes another act of gross injustice to the nation and tens of thousands of victims of extrajudicial killings, enforced disappearances, illegal arrests and detention, torture and harassment perpetrated by the Marcos fascist regime,” it added.

The militant group Bayan slammed the extravagance of the solid bronze casket imported from the United States that is expected to be used in the interment, noting that it costs up to $30,000.

“That act would stand out as another insult to Filipinos and a grim reminder of the Marcos regime of plunder and abuse,” said Bayan secretary general Renato Reyes.

“The wealth illegally amassed by the Marcoses will again be used to ‘honor’ the late dictator in the same way it is used to whitewash his sins. State honors and the Marcos family’s ostentatious display of wealth are doubly insulting to the victims of the dictatorship,” Reyes added.