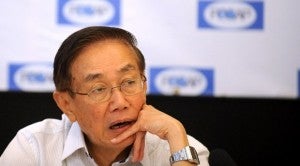 “The CPP rejects the new ultimatum set by GRP (the Government of the Republic of the Philippines) President Duterte demanding an end to the NPA’s use of CDX landmines with a threat of ending peace negotiations with the National Democratic Front of the Philippines (NDFP),” the group said in a statement on Monday.

Duterte, in a visit to a military camp in the Visayas on Monday, warned the communist movement that he would withdraw his support to the peace process and recall the government panel if he heard another attack involving explosives, specifically landmines.

“By setting such an ultimatum, after having yet to fulfill his own promise to release NDFP consultants and political prisoners, smacks of a poorly crafted deflectionary tactic, with the aim of blaming the revolutionary forces for the repeated postponement of peace talks,” the CPP said.

The CPP said President Duterte’s position on the peace process has been changing since he started going around military camps.

“Apparently, President Duterte’s mindset is becoming more and more militarized as he hops from one military camp to the next. As he surrounds himself daily with US-trained military officers and soldiers, it appears that he is more and more obsessed with ending the armed revolution through suppression,” the CPP said.

It added that this would put a distance between the new administration and the ordinary people.

“He is increasingly drawn away from the people and their urgent concerns over lack of jobs, low wages, landlessness, spiraling prices and growing desperation,” the CPP said.

The CPP said it has been alarming that Duterte is continuing issuing threats of war allegedly ignoring the existing strength of the NPA.

“He is showing himself to be more and more cantankerous, inventing one reason after another to attack the CPP and NPA instead of finding ways to push forward peace negotiations. He is daily becoming more bellicose, issuing threats of intensifying war, apparently oblivious over the failure of the AFP to stop the growth of the NPA in Mindanao and the rest of the country despite having deployed increasing number of troops against the NPA since 2011 under Oplan Bayanihan,” the CPP said.

But the CPP also said Duterte has been making these statements to satisfy the military.

“He issues one sensational but completely empty statement after another such as recruiting one million soldiers. He has resorted to personally bashing the revolutionaries without effect but to satisfy the base humor of his bestial AFP troops and their zealot officers,” the CPP said.

Despite the recent challenges, the CPP claims that the communist movement is still eager and optimistic over the scheduled resumption of formal talks in Oslo on August 20.

“The CPP urges the Duterte regime to fulfill its promise and immediately order the release of all 22 NDFP consultants and around 550 political prisoners by withdrawing all the trumped-up charges against them. If he does so, the GRP president will succeed in boosting a hundredfold the confidence of the revolutionary forces that he is indeed a man of honor,” the CPP said.

“He would also succeed in proving that his government is indeed different from the past regime which only used peace negotiations in the vain attempt to cause the surrender of the NPA,” the communist movement added.

The CPP said the communist movement is still willing to work with Duterte in addressing the causes of the conflict.

“The CPP and all revolutionary forces are ever ready to work with the Duterte regime to actively pursue talks to resolve the roots of the armed conflict through negotiations,” the CPP said.  SFM