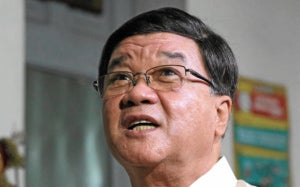 He said the names of prominent local politicians and drugs lords funding media groups were discussed at the meeting on Monday by the Cabinet cluster for security, justice and peace.

Aguirre also said that President Duterte would bare names of more “prominent politicians,” including governors behind the illegal drugs trade.

Pressed for details, Secretary Aguirre, in a text message told the Philippine Daily Inquirer: “No details yet of media campaign funded by drug money. Many more big politicians will be exposed.”

He also called for more signal jammers inside the National Bilibid Prison (NBP) as he said 75 per cent of the drugs transaction across the country has been originating from there.

“I’m appealing for your help,” said Aguirre, as he called for more donations of signal jammers inside the NBP to cripple the drugs transaction through mobile phones inside the NBP.

“We are not yet done, there are big and prominent  politicians (behind drugs trade) will be named soon. They were mentioned at the Cabinet meeting,” Aguirre told a roaring crowd of fraternity members of AKRHO gathered on Monday night at the Cuneta Astrodome in Pasay City.

Aguirre urged thousands of AKRHO fraternity members “not to give up on support for President Duterte’s war one drugs.”

“Change is here. Let us join in the brotherhood for change,” said Aguirre.  SFM